At the moment, there seems to be only one builder's crane in operation in Pontevedra. And this is constructing not a block of flats or a comunidad but just a single unifamiliar (detached) house. Unfortunately, it's just below mine, as you can see from these fotos:-

The distant view, via my bedroom bougainvillea. 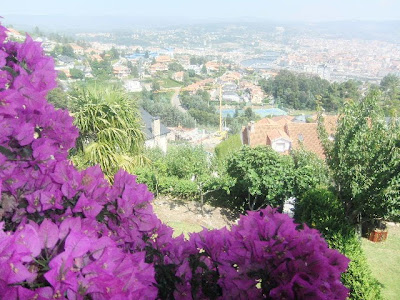 And the zoom view, which (ironically) is rather more true-to-life:- 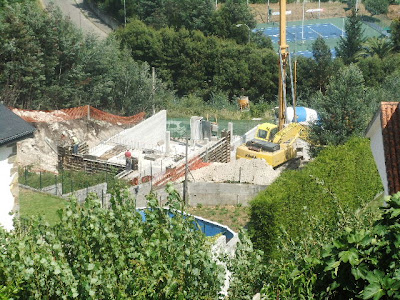 Readers of my post of 24 April may recall that work began about that time with the noisy cracking of the granite subsoil. In other words, around 3 months ago. My understanding is  it's not uncommon for a house to be completed in this time in the UK, whereas my suspicion has long been it takes nearer to 2 years on average here. Or 6 years for the houses - finished but still unoccupied - right behind mine. We will see with this one, on which - it has to be said - work is episodic.

In honour of his recent death, I'm re-reading one of Tom Sharpe's novels - 'Ancestral Vices' - one of only two I've got left on my shelves after friends have 'borrowed' the others. I've read many funny novels in my time but, as far as I can recall, only Sharpe can keep a smile permanently on my face as I read. Augmented by a regular belly-laugh. An amazing writer, whom I highly recommend.

Spanish Corruption: As the governing PP party's strategy of just shrugging off the serious accusations made against it hasn't worked, they're now on a new tack - trying to undermine the judge who's presiding over the initial interrogation stage of the (long, long) judicial process. Their other strategy is to close ranks to stymie the parliamentary process of a a motion of censure against the government, with no one from the party - except Rajoy's long-standing antagonist, Esperanze Aguirre - willing to say anything at all about the accusations. En passant, the most black money is said to have been channelled not to President Rajoy (a mere 350,000 euros) but to a consultant called Pedro Ariola(who he?), whose sticky hands pocketed 1.5m euros. True, Rajoy was the second largest beneficiary but there's no real comparison. I wonder what the explanation is. Was Ariola a friend of the conduit in the dock? Finally on this, I read this morning that Rajoy isn't obliged to speak during the censure debate: he can delegate this to one of his faithful lieutenants. So, a wide choice. Democracy is not yet alive and well in Spain, though it's only a young creature after all. And hasn't yet learnt to walk.

Talking about closing ranks (or rallying round) . . . One Spanish phrase for this is hacer piña. Or 'to make a pineapple'. Soft inside, hard outside. I was reminded of this yesterday when the lovely Ester used the phrase copa del pino, or the 'top of the pine-cone'. Meaning something huge, dreadful. I think.

For Spain's ship builders, the bad-to-terrible news is that the EU Commission has decided they must pay back millions and millions (if not billions) in 'illegal' subsidies received from the government over the last 5 years. It could've been worse: it could've been 7 years. If this happens, it will - allegedly - bankrupt the industry and throw tens of thousands of people out of work. So I wonder whether it will happen and what the EU will do when it - almost certainly - doesn't happen. I mean, has Spain yet paid the humongous fine imposed on her after the flax scandal of the late 90s?

Finally . . . I saw an article yesterday authored by someone called Gabriela Cowperthwaite, which struck me as an odd combination of exotic Latin and down-to-earth Yorkshire. I was close but not close another. Its origins lie in the other side of the island, in Cumbria. The red rose, not the white.

Arriola is Rajoy's principal political advisor, the mastermind behind the idea that if you don't say anything and never appear in public then nobody will ever mistake you for the leader of the government. Obviously he now has his own personal motives for reinforcing that strategy in the light of the Bárcenas revelations.

Thanks, Graeme. Good to hear from you.

Yorkshire names get about, albeit with minor changes in spelling. Here is a man whose vernacular architectural offerings impresses me.