The EU and a Brexit. I don't think the EU President, Mr Juncker, - for all his excellent English - understands Brits at all. For he's just warned they'll be treated as 'deserters' if they jump off the EU train that's heading - albeit slowly - for the bumpers. Gisela Stuart, a (German born) Labour MP and a prominent Brexiter, commented: Another day, another threat from those trying to intimidate the British people into voting to remain in the failing EU. These extraordinary comments are a new low. Quite. And pretty stupid. I'd be delighted with them if I were running the Leave campaign.

Conversations at El Tráfico: I went to pay my earphones fine yesterday, only to find that the municipal Fines Office no longer deals with these. One of the 3 other options was the Tráfico Department, which was convenient as I was on my way there to check on the points on my licence. Here are the 4 conversations I had there:-
1. With the lady who took my money:
Here's my licence.
Thanks. Could you give me your ID card too?
Why is that necessary, as you have my licence and I'm here to give you money?
Well, we need both otherwise we can't take your money. A chap came in the other day to pay his wife's fine but only had his own ID. So we couldn't take his money.
Right ??? . . . Here it is.
2. With a lady in the Enquiries queue about a clerk who was doing nothing:
Do you think he's actually working?
It doesn't look like it.
3. With the lady at the Enquiries desk:
I'm here to check my points. Here's the response I keep getting [giving here a copy of the web page entitled Request for an Access Code]. It keeps telling me I'm not registered in your system.
You need an Access Code.
Err . . .That's what I've been trying to get. And [pointing at the document] that's always the reply.
You're supposed to get an appointment to talk to me.
[Barefacedly lying] I'm sorry. I didn't know the system until I got here.
Fill in this form and then give it to my colleague, [Mr Idle].
4. 'Conversation' with Mr Idle:
[Me, sliding over the completed form]: . . . .
[Him, checking on his computer]: . . . .
[Him, handing me a print-out]: . . . .
[Me, pointing at my licence still on his desk]: . . .
[Him, sliding my licence back to me]: . . .
Too tired to talk? Whatever, all excellent examples of Spanish bureaucracy at work. Other than for reasons of job-creation, I couldn't understand why Mr Idle wasn't also dealing with enquiries, reducing the wait in the queue. Anyway, on the way to my regular midday bar, I passed the central police station. There was a 4x4 of theirs outside, half parked on the pavement. You get heavily fined for that. Usually.

Galician Celticness: I happened upon this comment yesterday in a flier for a Celtic Festival in New Mexico: Galicia is an area of Spain and Portugal and is one of the 7 official Celtic tribes. Well, No and No. True, there used to be Celts in Galicia but this is also true of the whole of northern Spain (Cantabria and Asturias) and also of northern Portugal. It's not clear why the other Iberian regions were excluded from this claim. But, anyway, there are only 6 official Celtic nations, all of which still have Celtic languages. And none of the Iberian regions is/are among these. That said, no one would deny Galicians the pleasure they take from their Celtic connection. It helps to define the regional identity which is so important in Spain, where local fidelity can rank above national fidelity. Most obviously in Cataluña, of course.

Bull Baiting. There's an annual fiesta in the city of Tordesillas which centres on the chasing, harrying, stabbing, lancing and killing of an angry, terrified and exhausted bull. As a result of national and international disgust at this barbaric event, the final act has now been banned. At least in public. However, nothing is said in the decree about all the prior activities. Plus ça change . . .?

Finally . . . Another Local Conversation Yesterday: With a female friend. And one I probably couldn't have safely in the UK:-
I see you're sporting even more cleavage than yesterday.
For goodness' sake, Coleen. It's summer!

Here's a few of the 200 escudos which adorn 15th and 16th century buildings in Pontevedra's gem of an old quarter. If you want to see more of them, write to me at colin@terra.com: Which must be one of the shorter email addresses in the world . . . 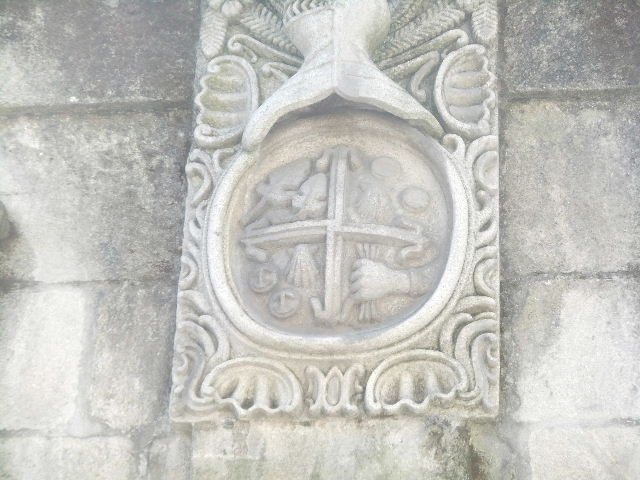 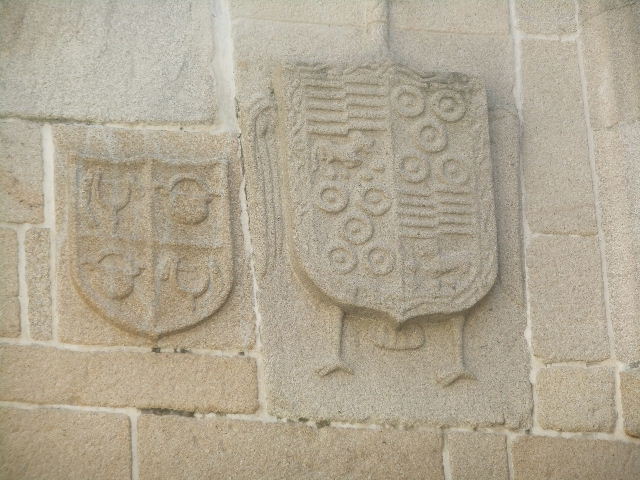 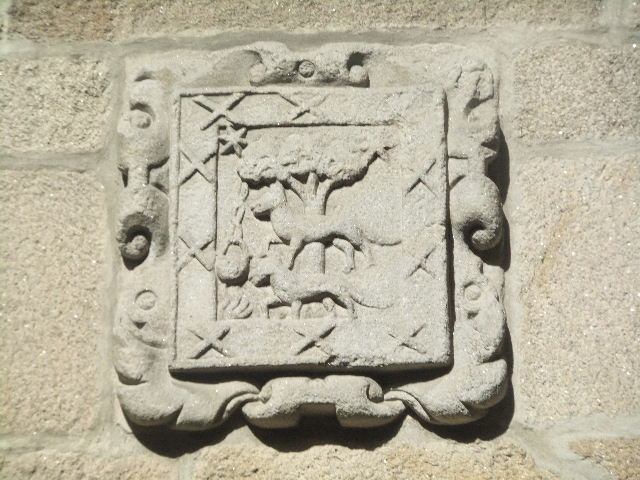