The Spanish Brexit Hinge: A university professor here says Spain will play a crucial role in how things unfold, specifically as regards Scotland's ability to go its own way. Few outside Cataluña in Spain want that to happen. For obvious reasons.

Spanish Practices Again: El País thinks that it still matters here who(m) you know, rather than what you know. Read their article on nepotism and cronyism here.

Well, There's a Surprise: Invoices in relation to work done on the AVE high-speed train lines are said to have been inflated by the trifling amount of €82m. Thirteen (state) employees of Adif have been arrested in Barcelona in connection with this. All nice people and good parents, of course. One paper reports that some of the cash went on prostitutes, skiing holidays and some extravagant lunches. More here.

Developing Spain: For the first time, purchases made by credit card have exceeded cash taken from ATMs. But this, of course, rather ignores the cash that never makes it to the bank, for one reason and another.

Getting Your own Back: This used to be the phrase used, inter alia, when you spat against the wind or peed so clumsily you got some on your trousers. But now it applies to a new type of paint that actually guarantees the latter. See here.

Galicia Promotional Videos: Someone has posted 3 or 4 of these on my Google+ page. Here and here are a couple of examples. Oddly all of them are in Galician(Galego/Gallego). So, the region is only being promoted to those who already live here??

Those Funny French: My lovely French guests of last week told me of a problem they'd had in Spain: When they asked about the strength of a wine, they were always merely told its alcohol percentage. In France, they say, this refers to the quality of the wine and not to the alcohol content.

Finally . . . An ankle oddity: I visited our new museum on Friday last. It's much improved since nearly all the stuff from the old one was moved there. The bit of the building which belongs to the old Jesuit convent has a sprung wooden floor. I've no idea why but I do know that, walking on it, I suddenly developed a shooting pain in both ankles at the same time. As soon as I moved to the granite staircase, this stopped. Very strange.

Finally, finally . . . A correction: The European Union: The Rape of Europa: I cited this book the other day. A quick flick strongly indicates it's an anti-semitic rant. Should have read the reviews before I bought it. Except there aren't any. Or, rather, there weren't until 5 minutes ago. Don't buy it!!


For those who don't go to my FB page, here's the 8am view from my bedroom window this morning:


Awake! For morning in the bowl of night
has flung the stone that puts the stars to flight.
And, Lo: The hunter of the East
has caught the sultan's turret in a noose of light?" 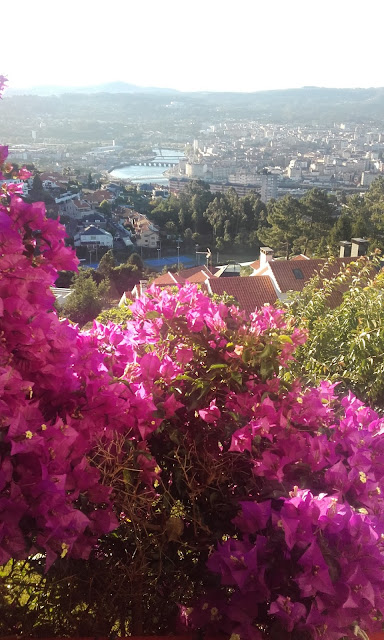