Spanish Politics: After gains for the (very) corrupt PP party in the latest round of inconclusive elections, a small party of the Left has announced it'll be putting 500 criminals on its next list of candidates, so as to improve its chances of securing more seats in the parliament.

Driving in Spain: If you lose all your 12 points here, you have to go on a course. Surprise, surprise – the Guardia Civil is investigating claims that there's been skullduggery in the granting of the franchise for this. And quite possibly in passing pupils.

Brexit: Richard North of EUreferendum continues to excoriate British politicians and the media for their ignorance around what's happened:- For want of understanding, the politico-media establishment is doing what it always does – churning out a torrent of words. But rather than aid clarity, this does nothing but draw attention to the single fact that, in its response to the EU referendum, total confusion reigns. No amount of reading, no careful summarising and no diligent synthesis will deliver clarity. It is not there to be had. After decades of ignoring the detail of our relationship with the European Union, the establishment is well and truly caught out. It really doesn't understand the subject, so all it can do is make a great deal of noise, and hope no-one notices. . . . We are mired in a Westminster soap opera that is generating a great deal of heat, but very little light. In this classic post, Richard North plumps for Theresa May as the least bad option for a successful negotiation around an Article 50 exit. For what it's worth, I agree.

Galicia: The head of the Guardia Civil here has gone on record saying that: Our feeling is that drug trafficking continues to take place in Galicia. And - as Private Eye would put it - that the Pope is a Catholic and bears shit in the woods. And this passes for news? It must be summer.

The European Championship: Until recently, this has been, as one commentator put it, a flat tournament in which fatigue, fear and familiar failings have dominated. But Thank Whoever for Wales and Iceland. What a final that would have been! As the same commentator added - There is no need to discuss England. Probably because words would add nothing to their abysmal performance.

Genetically Modified Rice: No fewer than 110 Nobel Prize winners have formally recorded their view that Greenpeace's campaign against this is costing many lives. Science, though, doesn't count for much when you have views akin to religious faith. Shame about the suffering. It's not even as if plants haven't been genetically modified throughout human history. Where does Greenpeace think today's wheat came from?


Finally . . . Washing Up Liquid: I'm on record as saying that women tend to use at least ten times more of this than I do. As was confirmed by the young French guests I had last week. Today, my sister arrives for a couple of weeks and she's the British and world champion at this. So I'll be buying 2 or 3 bottles of liquid today, before I pick up her and my niece at Oporto airport.


A wonderful cartoon on the subject of the interecine war in the British Conservative party. Of course, it would do for the Labour party as well, though with more participant. Amusing times. 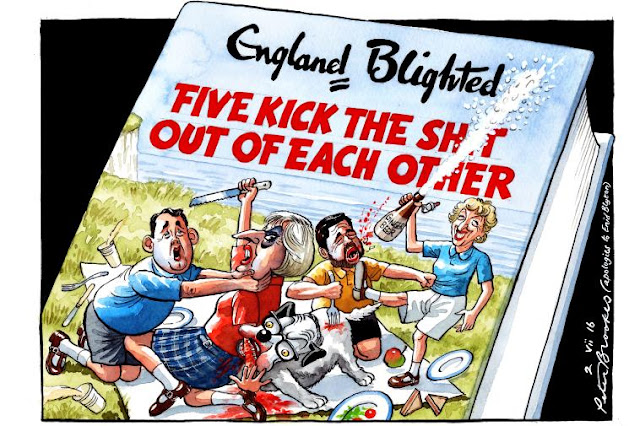