Spanish Government: The farce continues, with the king trying to issue ultimatums to the various actors. The latest development seem to be that acting-president Rajoy will agree to have a vote in Congress on the candidacy of his PP party but, expecting failure, might well not attend it. As  someone has commented: Spain's prospects of avoiding a third general election appear slimmer than ever, after King Felipe finished his round of consultations this week.

Gibraltar: Nothing could have been more predictable than the reaction of the Spanish Foreign Minister - Motormouth Margallo - to the Brexit vote . . . The Spanish Government will veto the terms of any Brexit negotiation between the UK and the EU that seeks to include Gibraltar. Sr Margallo never misses an opportunity to play to Spain's far right gallery. Of course, he might not be in the job at the relevant moment. With luck.

The ECB and Greece: Ambrose Evans-Pritchard tells us that the IMF admits a disastrous love affair with the euro and apologises for the immolation of Greece. More on an astonishing report here. As ever, the EU political project was seen as more relevant that the rights and the wellbeing of its citizens. Or some of them at least. The poorest and least powerful.

1. As regards doping in sport, the channel sees everything as a politically-biased Western attack on Russia. It seems to be beyond their capabilities to recognise that attitudes and actions stem from the fact it is/was state-sponsored. I mean . . . how political can you get??
2. It was good to see the analyst Bernadetti Beri wipe the floor with RT's stock harridan yesterday in respect of Syria. On this subject, RT's main objectives are to prove that:- Assad is not that bad; that the 'moderate' opposition isn't really moderate (probably accurate here); that everything the USA does is merely political theatre; that Russia has got everything entirely right; and that the stupid West has got everything wrong. It's surely hard to be objective on Syria but RT - with a total lack of subtlety - doesn't even bother to try.

Driving in Spain: Yet another warning about roundabouts/circles. Or, rather, yet another repeat of the same warning . . . Be very careful about cars on your right. Yesterday, I twice had the challenge of someone doing a U-turn while in the outside(right) lane. In the case of a learner driver, this was entirely without signals. If you try to exit from the inner lane and hit a driver on your right, the law says this is entirely your fault, regardless of how stupidly the other driver was behaving. Never exit without looking into your mirror and/or over your shoulder. Always remembering that, here in Poio, you might be booked for turning your head more than 28 degrees.

Finally . . . Spanish processes: Why do these always take longer than elsewhere? I've just had to securitise my bank bank card in order to buy a car seat for my granddaughter, due in August. For one reason and another, I had to enter my account number at least 10 times. Midst a good deal if frustration and irritation. Incidentally, as with bikes, news laws and new techology have conspired to take the price of cars seats to levels many times higher than when we bought one for my granddaughter's mother! The one I've been instructed to get comes in at a mere €500. A car-seat, that it, not a bloody bike.

In 16 years, we've had a variety of contenadores near my house. And they've been positioned in at least 50 different permutations over the years. One of these directly opposite my front gate.

But now they've all been put together in one place, on their own little concrete base. So, it looks like there won't be any more changes for a while. Which is good news, even though I now have to walk 100m to get to them . . .  The question is - How long it will it be before they're covered in the brambles (called silvas locally but zarzas in Spanish) growing profusely behind them . . . ? 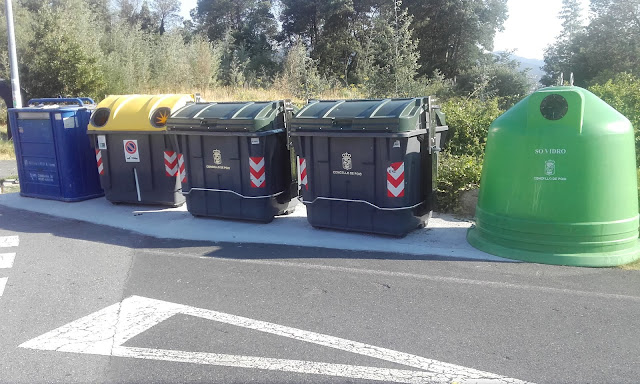 Updates:
1. Tourism: Here's what at least some folk in Palma, Mallorca think about it.
2. Post Brexit Nationality: Here's something of interest to those who want to be both British and Spanish.
3. Filtering my hits: Not working. 1,300 yesterday, many from Moscow.
at July 29, 2016