Final camino news item . . . Leaving Ponte de Lima early yesterday morning for Rubiães, we passed  alternately between moderately high and very low temperatures, depending on the degree of shade. The result, in my case, was a cold which had both my nostrils streaming by the end of the day. I was reminded of those cryptic comments about people in earlier centuries which ran something like: “So-and-so went out in freezing weather, caught a chill and died suddenly the next day”. But I am made of slightly hardier stuff and merely abandoned the last day of my camino, took a taxi to Valença from Rubiães and picked up my car there. And am now back home and in bed, swigging hot toddies and trying to sweat it out.

Monterrei is an up-and-coming wine-growing area in the mountains of Galicia, en route to Benevente and Madrid. I read this morning that most of its vines were destroyed by a sudden frost this week. Which is, of course, a lot worse than catching a cold.

It's an oft-stated truism that Spanish politics is tribal. As if we needed another reminder of this, one came along this week, when the Podemos party tried to introduce a motion of censure against the institutionally corrupt PP party, currently in power. None of the other parties supported it and the PP naturally dismissed it as mischief-making designed merely to discomfort the currently leaderless PSOE party, which is still – just about – the main opposition party. As if politics was a parlour game for kids. Whatever, it won't come to pass.

Which reminds me . . . There's good news on the corruption front. Click here for recent progress against this Spanish monster.

And here's some good news for residents of Spain who are worried about losing their rights post Brexit: The Vienna Convention states that if a person from one country resides in another for more than 5 years, then they are entitled to stay under the terms under which they moved there, even if the treaty in existence when they moved is amended or cancelled.

Yea! Go Galicia! Our city of Ourense is in the van as regards a geothermal heating system. Click here for more on this. Someone needs to tell the author that Galicia is a region, not a province of Spain. More correctly,  an 'Autonomous Community'. With 4 provinces.

Finally . . . Last week, I saw the word leghón and assumed it was Spanglish. But it turns out to be a sort of spade-cum-large-hoe. 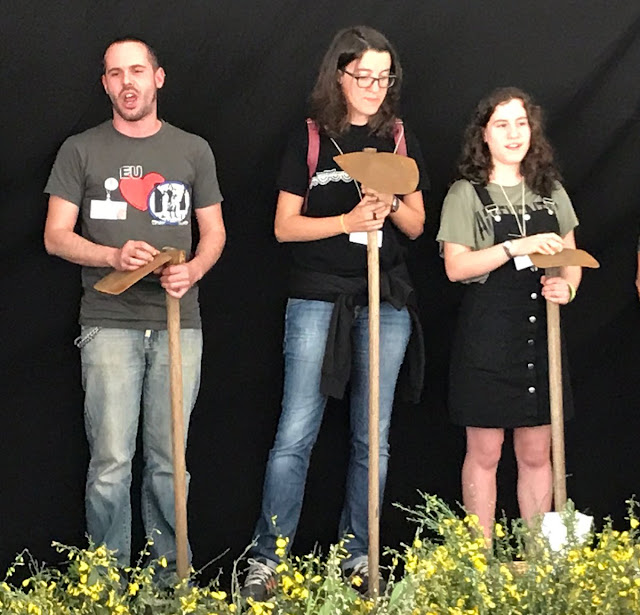 And the reason it was in the news was that some folk dancers were going to be performing around town, accompanied by 'musicians' tapping on various sizes of these. I would've posted a video of this but my visitor, Jack, has yet to send it to me . . . With luck, this will shame him into doing so.
at April 28, 2017