Greece: The history of art has been rewritten after archeologists unearthed an astonishing 3,500 year old carving of an ancient Greek battle, depicting human bodies in anatomical detail which was thought way beyond the skill of Bronze Age artisans.

Saudi Arabia: The local robot equivalent of Amazon's Alexa is called Sophia. She's been given citizenship and doesn't need to cloak her face and body. As has been pointed out, this gives her more rights than female residents of that benighted country.

Fortunately, the locals seem to have forgotten about all this and only recall the earlier depredations of Francis Drake.

Finally . . . According to the poster I saw on a toilet wall in a Bridgnorth pub last week, men and approach their ablutions differently. At least in the UK. 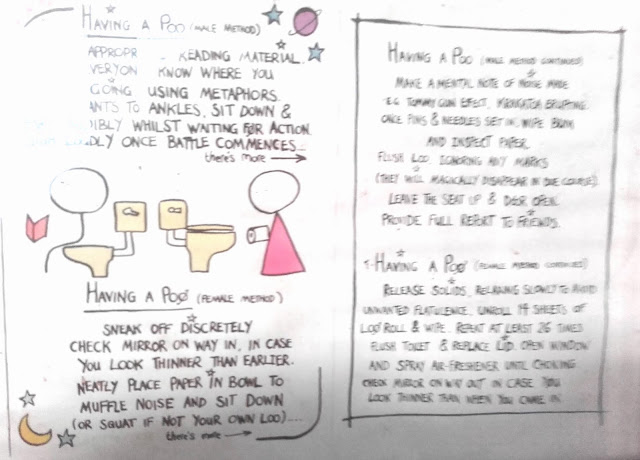 Shame they couldn't get 'discreetly' right . . .  And about the missing text top left.

Pardon me for asking, but what exactly is it that Damian Green has done? I realise that demanding proof of wrongdoing before a man’s reputation is hung drawn and quartered and his head becomes a GIF on Twitter marks me out as a bit 20th century, but still, I’m genuinely curious.

Actually, it’s not clear that Damian Green had anything whatsoever to do with the pornography which police apparently found on a computer in his Parliamentary office during a leaks inquiry back in 2008.

Mr Green denies any knowledge of the material which even the police admitted was perfectly legal. Never mind. There is no one quite as friendless as the man whose name has been muddied in the middle of a moral panic.

His allies dare not speak out lest they be called apologists for sexual harassment. The man’s political enemies, meanwhile, revel in his discomfort and throw another log on the fire which is licking at his shins.

As for his wife and children, well, we can probably guess how they feel, but we don’t pause to extend imaginative moral sympathy to Mrs Green and the kids because that would spoil the fun, wouldn’t it?
Well the fun or, at least, the borderline unhinged spate of accusations and counter-accusations will temporarily have to stop. For, even as I write, there comes the tragic news of the death of Carl Sargeant.

The 48-year-old Welsh Government minister, husband to Bernie and father of Lucy and Jack, is believed to have taken his own life after he was suspended by Labour on Friday following allegations of sexual misconduct from at least three women. In his last tweet, Mr Sergeant said that he found the accusations “shocking and distressing”.

The details had yet to be disclosed to him. (The same thing happened to Tory MP Charlie Elphicke  who took to Twitter to say, “The party tipped off the press before telling me of my suspension”.) We don’t know whether there was any truth in the women’s complaints, nor how serious they were.

What we do know is that Carl Sergeant is the first fatality in the witch-hunt that has consumed Westminster and the media, a pursuit characterised by a dismaying lack of proportion and a gutless response from our cowering political classes.

Jeremy corbyn said that Carl Sergeant’s death was “terrible and deeply shocking news”. It’s not really that shocking a thing for a human being to do, is it? Not if the party to which you have belonged your whole adult life treats you like a criminal without telling you your crime, expels you, shames you before your family and your constituents, confiscates your respect and your livelihood, then throws you to the wolves so it can look morally superior to the opposition.

But let’s go back to the allegations against Damian Green to see how the witch-hunt gathered momentum. The story which landed the First Secretary of State in trouble came from Kate Maltby, a “scholar, critic and journalist”. Green was a friend of Maltby’s parents from Oxford days.

While she was still in her teens, Maltby used the connection to secure an interview with him for her school magazine. When she became a Tory activist in her twenties, she contacted him again to “ask for advice on internal matters”. In 2014, they met for a coffee to discuss a collection of political essays and Green was “helpful and avuncular”.

Early the following year, Green invited Maltby for a drink and they discussed her pursuing a political career. Then, according to Maltby, Green steered the conversation to the number of affairs MPs had and mentioned that his own wife was very understanding.

“I felt a fleeting hand against my knee — so brief, it was almost deniable,” she wrote, “I moved my legs away, and tried to end the drink on friendly terms. I then dropped all contact for a year. I wanted nothing to do with him. For a while I wondered if I’d imagined the incident. I had no proof… But I was angry.

"I had felt a meaningful political relationship was developing — suddenly, I’d been made aware that there might be a price I was not prepared to pay.”

The key sentence here is “I had no proof”. Any decent editor would stop Maltby at that point and say, “Sorry, Kate, you’re going to need more than this.”

A “fleeting hand” does not a Harvey Weinstein of Westminster make. But the story didn’t end there. In May last year, Maltby posed in a corset to illustrate a piece about the history of corsets. She got a text from Green admiring the picture and asking if she was free for a drink.

Maltby ignored it but, six weeks later, when Damian Green was suddenly one of the most important men in the country, Maltby texted him. “Many congratulations on joining the cabinet…..  I’ll look forward to seeing what you achieve in government.”

Overnight, the alarming “sex pest” had become someone Maltby was happy to cultivate. I would go to the wall for any woman who has been hurt or threatened by an abusive male, but this is a travesty. By turning what was, at worst, rather timid and failed attempt at flirtation into a career-besmirching blunder, Kate Maltby has risked bringing her gender into disrepute.

Not to mention undermining the genuine trauma of women like Bex Bailey, who claims she was raped by a senior Labour colleague and whose headlines were soon eclipsed by Maltby’s.

And what about those women on zero-hours contracts who really are defenceless in the face of predatory male management? When a highly-educated, confident female like Maltby behaves like a Victorian virgin with a fit of the vapours why would businesses take the risk of employing young women who won’t say boo to a goose, let alone “Bugger off” to a gander?

Look, there is absolutely no doubt that Westminster is a time warp which is rank with bullying and misogyny. Remember Labour’s deputy leader, John McDonnell, who recounted a comment calling for Esther McVey, now a Tory Whip, to be lynched? Certain Labour brethren are every bit as neolithic as those dysfunctional Tories who regard young female (and often male) staff as an all-you-can-eat buffet.

And how about that saintly Liberal Democrat who sources tell me is Parliament’s most prolific bottom pincher? Dismantling the boys’ club on both sides of the House and holding all members, honourable and otherwise, to the standards of the modern workplace is long overdue.

What should trouble us, particularly following the death of Carl Sargeant, is trial by media before there are any formal charges. So unhinged did the level of spite become that there were gleeful predictions that the Sunday papers would be packed with the names of yet more offenders. Pitchforks at the ready! Let those tumbrils roll!

In the event, there were slim pickings to be thrown to the mob in this prudish Inquisition. Beyond Westminster and the media village, I suspect millions of normal Britons are watching these antics, rolling their eyes and wondering, “What are they doing about Brexit?” On ITV’s Peston on Sunday, they have a “map” of words which people used most frequently in the past seven days. Parliament’s sex pests hardly featured.

What we desperately need is strong leadership. Theresa May appears helpless, buffeted about by each new gust of outrage and bowing to fashionable cries of “Inappropriate!” instead of speaking sternly and restoring a sense of proportion. That would be most welcome, Prime Minister.

The wheels of justice turn slow, but the wheels of social media spin uncontrollably fast and society is ever more driven by the latter. Not all misdemeanours are crimes, but you wouldn’t know that nowadays. A man is dead today because what began as a legitimate concern spiralled into a kind of mania.

I don’t know about you, but I find that far more distressing than a fleeting hand against the knee.
at November 09, 2017