Spanish life is not always likeable but it is compellingly loveable.
- Christopher Howse:A Pilgrim in Spain.

Spain
Life in Spain
The EU
The World
Galicia/Pontevedra
The World Cup
Finally . . .
A Request 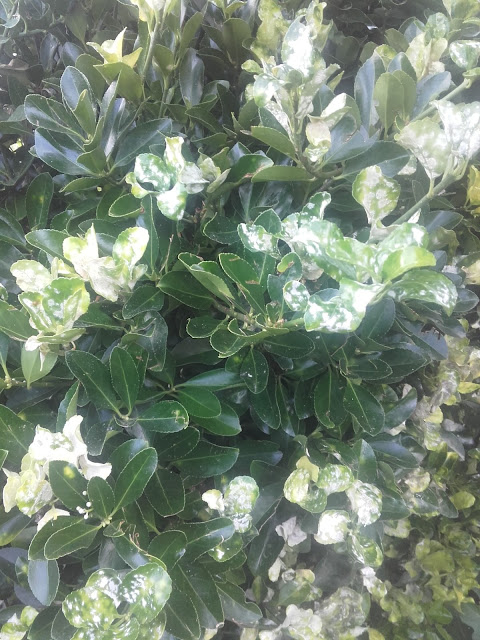 I thought it was bird shit at first but now suspect it's a (fungal) disease of some sort.

Emmanuel Macron’s "grand plan" to relaunch the euro on safer foundations lies in tatters after Europe’s northern bloc refused to contemplate any form of fiscal union, and exhausted leaders kicked the crucial issues into touch.

After battling deep into the night over migration there was no energy or emotion left at the Brussels summit for a fight over fiscal architecture. There was no plausible backing for the French president’s great leap forward any case. The paralysis means that Europe is likely to stumble into the next global economic downturn disastrously ill-equipped. It will have no shared fiscal instruments of any scale to fight recession, leaving the weakest states vulnerable to collapse.

The eurozone is no closer to a "fiscal capacity" or proto-treasury able to contend with big shocks, or that entail US-style transfers to regions in trouble. It is still sauve qui peut , the same structure that nearly destroyed monetary union in the banking crisis of 2012. “The eurozone’s death wish has never been stronger,” said Yanis Varoufakis, Greece’s ex-finance minister.

The Franco-German Meseberg Declaration on eurozone reform published with much fanfare two weeks ago – already a diluted version of Mr Macron’s original vision – never even made onto the summit agenda, let alone the conclusions. “Leaders only delivered the bare minimum. Decisions were postponed to the December summit. Extend and pretend,” said Carsten Brzeski from ING. “Perhaps someone should warn them that by delaying, they risk another nightlong European summit, this time on how to rescue the eurozone.”

The global business cycle has not been abolished. The talk at hedge fund gatherings have already rotated from how to play the final stage of the boom, to how to design a "short" strategy to weather the storm. Recession worries are edging on to radar screens as the end of central banks drain global liquidity.

The eurozone is already in a soft patch. The expected rebound keeps disappointing. German retail sales fell by 2.1% in May, the biggest drop since the onset of the 2011 crisis. European bank stocks have slumped 15% since late January, often a harbinger of trouble.

“A eurozone recession can’t be allowed to happen,” said Barnaby Martin from Bank of America. “The idea fills us with a lot of fear. The QE years in Europe have profoundly altered the structure of the euro credit market.”

Issuance of BBB bonds has exploded fourfold to €800bn (£710bn) and many of the borrowers are badly exposed to a combined growth shock and a trade war. “We worry that the ECB is ending QE, but that nothing else is planned to take up the slack.”

The eurozone can muddle through without any meaningful fiscal union as long as the global expansion rolls on. Once the cycle turns, it will be dangerously naked. The European Central Bank cannot easily come to the rescue a second time. It has largely run out of monetary ammunition.

Interest rates are stuck at minus 0.4% until late 2019. The ECB has "pre-committed" itself halting bond purchases by the end of this year. While this can be reversed in an emergency, the political bar is high and the effects of QE are in any case diminishing. The ECB balance sheet will soon reach 43% of eurozone GDP. German-led hawks will not lightly renew bond purchases if they are seen to benefit a rebel Italian government in open defiance of the eurozone Stability Pact.

Mr Macron originally called for a proto-treasury commanding “hundreds of billions of euros” to pack a counter-cyclical punch. Meseberg whittled it down to an investment fund if €30bn to help countries through an asymmetric shock, but in the form of loans rather than fiscal transfers. Even this was too much. Nothing has been agreed. This is courting fate. There is little to prevent debt dynamics spinning out of control in vulnerable economies with high legacy burden. Italy’s debt ratio is 132% of GDP and Portugal’s is 126%. A recession starting from these levels – without a clear lender-of-last resort – would be devastating. Bond vigilantes would not wait.

The only measure agreed was an EU "backstop" to boost the firepower of the Single Resolution Fund for insolvent lenders. But this will not be fleshed out until December, and the devil is in the details. There is still no pan-EMU bank deposit insurance. The 2012 "doom-loop" for banks and sovereign states remains, each threatening to drag the other down in a self-feeding crisis if confidence snaps. Markets have chosen to see the glass half full. The Euro Stoxx index of equities rose 1.2% on relief over the EU deal on migrants. It is thought enough to save Chancellor Angela Merkel’s political career.

Yet the stormy summit is a warning. It showed that the EU is dealing with new kind of animal in Italy. The insurgent Lega-Five Star coalition relishes a fight. It cannot easily be broken by the usual "Justus Lipsius method" of peer pressure and horse trading. This sets the scene for a bitter fight over Italy’s plans for a spending blitz, starting in September when the first budget drafts are prepared. The EU wants tightening of 1% of GDP under Stability Pact rules. The Lega-"Grillini" want net stimulus of 6%: a cancellation of VAT rises, a flat tax, and universal basic income, and reversal of the "Fornero" pension reform.

While there can be some accounting fudge over investment spending, this is a political chasm. The market discipline of rising bond yields has lost part of its bite. There is a widespread suspicion in Italy that bond spreads are manipulated by the ECB and that this is used as political pressure tool. “We couldn’t give a damn about bond spreads,” says Lega strongman Matteo Salvini.

Brussels is likely to hit a brick wall if it tries to stop the Lega-Grillini carrying out their core policies. If the ECB ratchets up the pressure by choking liquidity to the banking system à la Grecque, the Italians might respond by activating their "minibot" parallel currency and setting the eurozone on a path towards disintegration.

In some respects it was better that nothing was agreed. Germany had demanded a licence for forced restructuring of sovereign debt before there can be rescue loans. This was a bombshell. It risked a replay of the fateful “walk on the beach” in October 2010 when the leaders of France and Germany invoked for bondholder haircuts in Greece, ignoring ECB warnings that would set off systemic contagion. The debt crisis metastasized.

Mr Macron is left with little to show for a year of frenetic diplomacy. The Dutch-led "Hanseatic League’ of eight northern states were irritated by his fait accompli and his Jupiterian manner. They decry any move towards a eurozone treasury, deeming it a green light for fiscal violators.

He has bet his presidency on a grand bargain with Angela Merkel that would force everybody to jump to attention. But Germany has offered nothing more than fiscal crumbs. Europe has largely ignored him. The political window for radical reform has closed. Recession is drawing closer.
Posted by Colin Davies at 11:10 am

That fruit-pickers article should be widely publicised in UK given that many of the people there are going to have to take up that sort of employment when the Brexiteers have immigration under control, and that will be the only work available

That is indeed mildew.

Powdery mildew is pparently called oídio, though this might be a general term.

For your privet parts. http://homeguides.sfgate.com/privet-hedge-problems-43811.html

AEP, as usual, has pointed out that Amanuensis Macaron, the puerile Napoléon, is a classic example of ambition without ability. The Luc Picard command "Make it so" is not going to work. Ancien Régime il n'est pas!

A Juggernaut of monumental Merkel proportions is headed down the autobahn & French aspirations are not part of her final solution. Le mot juste would be le lapin (pris dans les phares).

Horchata is nice - has to be ive cold. I drink a lot of it.

Ice cold that is.

Thanks for all that, Perry.