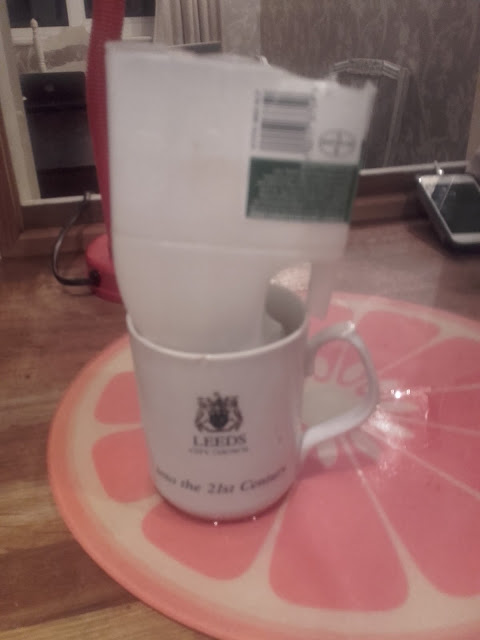 In case you haven't worked it out, it's a small milk container, upended and opened up. Works perfectly. Almost.

The vile snobs who wrecked Brexit will answer to an insulted people: Janet Daley

The belief that Leavers are bigoted know-nothings doomed Brexit from the start.

Yes, boys and girls, this is really happening. Your government is actually collapsing into intractable chaos while the integrity of your country is being offered up for a handful of indulgences from a ruling body over which you will have no control.

Like everybody else I have absolutely no idea where this is going to end but I do have a pretty clear idea of how we got here. Given that the catastrophic place at which we now find ourselves was rooted in the earliest assumptions with which this misadventure began, it is not simply an exercise in melancholy to review the history. Sometimes re-watching the collapse of a monument in slow motion can provide insights that the simple fact of its implosion does not provide.

So let’s remind ourselves of what it was like in the Age of Innocence when we all thought we were being given a say in what everybody now agrees is the most important national decision since the war. The Referendum was going to precipitate a public debate in which the two sides would confront one another with reasoned argument, both evidential and philosophical, on the great question. Both sides would accept the rationality and conscientiousness of the other’s position.

Well, that’s what I thought was supposed to happen; didn’t you? As you may recall, it wasn’t quite like that. One side – now known as Continuity Remain – simply decided that the opposition consisted of bigoted know-nothings being deceived by self-serving opportunists who were using the Leave cause as a vehicle for their Machiavellian purposes.

There was only one way to treat this threat – or rather two ways which formed a kind of psychological pincer to achieve the same end: first, a terrifying series of threats involving economic collapse, food shortages and planes falling out of the sky and then a systematic campaign of vicious abuse, the vileness and shameless snobbery of which I have never witnessed before in Britain. And guess what? To the eternal, magnificent, staggering credit of the people of this country, it didn’t work.

Even I who, as a besotted emigrant to this land have almost unlimited faith in the character of its population, was taken aback by this utter refusal to be bullied or deceived. I have written of this before but now that we are reaching the endgame, it is worth repeating: the British will not be intimidated.

They are not frightened by threats. They are insulted (and eventually enraged) by them. And as for being traduced by their “betters”, they are used to that: they know how to martial their own communal solidarity to stand up to it. (This may be, ironically, a useful consequence of the class system: the very same insularity which Remainers decry in the post-industrial proletariat inures them to the derision of contemptuous metropolitans.)

How could the country’s elites have got it so wrong? How could they have so disastrously misunderstood the nature of their own electorate and fallen so stupidly into the “them-and-us” model which is embedded in the consciousness of almost all ordinary British people? From the early days of Project Fear to its final spluttering stage last week in which a six-week delay at our ports had suddenly transmogrified into a six-month one, the whole thing has been so crassly idiotic.

So purblind and arrogant in fact that it even got some of the most basic premises wrong. There was that endlessly chanted refrain (repeated by Philip Hammond in the Commons debate just last Thursday) that Leave voters, in their benighted naivety, did not realise the economic consequences that Brexit would bring: nobody, it was said, had voted “to become poorer.” Really? But if those voters had believed half, or even a tenth, of what they were told by the Government’s Project Fear prognostications, then that is exactly what they were voting for – or, at the very least, it was what they were prepared to risk.

Simple deduction: if they were ready to vote Leave in spite of all the hokum (sorry, experts’ warnings), either they were ready to accept becoming “poorer” for the sake of something they valued, or they did not trust a word they were being told by their governing elites. Didn’t it occur to anybody in the sublimely vain Remain camp, which was deeply embedded with the odiously self-regarding EU “negotiating” team, that the Referendum, having gone the way it did, meant that their entire strategy for dealing with British national opinion was drastically misjudged?

Then again, maybe it did occur to them, but how were they to counter the more profound, principled arguments for Brexit – the defence of Britain’s democratic institutions and the basic concept of accountable government? Perhaps there was a quite cynical decision to ignore the big questions and concentrate on the small ones because that not only got you off the thornier philosophical hook but also implied that Leave voters were basically small-minded people.

Ultimately it would be that belief – that Leaving was not about principles but practicalities – that would be the Government’s undoing. Theresa May had one brief glorious moment during the Lancaster House era, when she actually seemed interested in the larger, more edifying sense that leaving the EU could be a moral mission.

Then she lost an election and the advisor who had been scripting that incarnation, Nick Timothy, after which she handed the whole matter over to the tacticians in the civil service who regard every problem as practical. To be fair, it is not the proper business of the civil service to be driven by political conviction. It was now just a matter, as Mrs May loves to say, of “getting the job done”. So the pass was sold.

From the outset, the Brexit project was doomed by a disastrous failure perhaps understandably on the part of the European Union – but unforgivably by most of the British governing class as well – to understand this country and what drove it to depart from the EU in spite of all the risks and calumny that might invite. But this is still the same country – and the same people. It’s not over yet.
Posted by Colin Davies at 12:53 pm

Don't let the credit from O2 change your way of life!

"Angry O2 customers have slammed their phone network after it sent an 'insulting' apology text saying money would be credited to their accounts and have called for it to be donated to charity instead. The phone giant has offered a credit of 'two days of monthly airtime subscription charges by the end of January' for its pay monthly, small and medium business and mobile broadband customers.This means that for a customer on the network's cheapest £13 a month airtime contract, the credit would be 87p despite them not being able to use their phone for nearly 24 hours on Thursday."

...meanwhile, another view on the Brexit soap opera:

Excellent. But no need to cite for my benefit as i read all the columns in the Times, the Telegraph and the Guardian. Plus Richard North of course. And others.

I would change garages when you return to Spain. They see you're British and are trying to bilk you. Our local garage where we usually take our car charges nothing to check something out. Even once, when the window in my husband's car wouldn't go up or down, the mechanic started pulling apart the door. When he started checking the wires, the window went up. Since he saw there was no mechanical problem, (it's electrical, but he doesn't generally touch that stuff), he put everything together again and charged us only ten euros for the time spent, when it should have been more.

@Maria. TBH, I had detected a 'knocking' which the Hoylake garage agreed was there, even though they couldn't find a reason for it. I do normally use a taller where I have a personal intro. I hate to think what Honda would tell me here in the UK . . .