Spanish life is not always likeable but it is compellingly loveable.
Christopher Howse: A Pilgrim in Spain
Spain
The UK and Brexit
The EU/Germany
Finally . . .


o Our 5th day of great walking on this stellar, semi-virginal camino. Geoff's lovely fotos of it can be found here
o As we'd started at the 9km point and ended it in Belesar - at the bottom of a huge climb 6km from Chantada - we walked only 17km again today. For some reason or other - possibly waiting for Geoff to check where we actually were and to revise maps on the net - our pace was a little slower than on previous days. Of course, my painful foot also played a part in slowing us down over 4.5 hours.
o Mundicamino was particularly unhelpful in advising that the distance between each of the 12 hamlets en route - called nucleos in Spanish - was 0.0km. An additional factor was that some of these comprised only 1 or 2 houses and didn't have a signpost with a name on at the start and end of them.
o Again, not a single café or bar open - or even in existence - all the way to Belesar.
o One of my pleasures during the day was listening to Geoff argue with a site called Strava on details of the route. Nice to be able to report that Geoff always won.
o Again, we saw no other pilgrims all day. Except, of course, for Johannes of Austria who passed us within the first 10 minutes, poleing along at his rapid pace. But 3 young Spanish women arrived at out hotel in the late afternoon, disturbing German Geoff with their (totally normal for Spain) level of noise.
o And again we passed ruined houses galore, any of which could be converted into an albergue.
o After 3 hours, I was forced to take off my right shoe and walk for an hour and a half on tarmac in a stocking foot, which worked better than I'd expected. But I was very happy to reach the river Miño at Belesar, where German Geoff was waiting for us in my car. To reach this we had to slalom down a very steep hill through a delightful oak forest for 2km. Called Los codos de Belesar. 'The Belesar elbows.'
o The lowlight of our day came in the evening when we drove 8km to a farm which had produced the best blue cheese in Spain earlier this year. 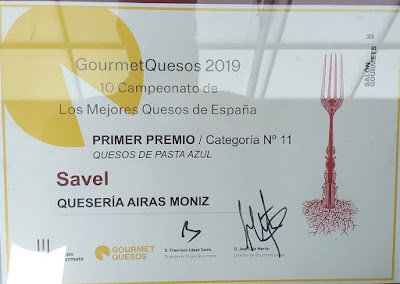 Or, rather, we drove c. 32km round and round the countryside, following Google's useless directions, until we finally found someone to tell us whereabouts it was. In Gallego. Which I struggled to understand but got the gist of.
o The highlight of the day came when - after a 20 minute wait - the single employee on the farm - gave the 2 Geoffs a tour of the small facility. And talked about his Jersey cows.
o The purpose of this odyssey had been to give Geoff Jones a taste of their prize-winning blue cheese but, ironically, there was none of this available to sell him. Worse, we were told that none of the shops in nearby Chantada stocked it. But Geoff will be able to get it back in the UK!
o Finally . . . here and here are Geoff's blog posts of the last 2 days.
at May 21, 2019