Spanish life is not always likeable but it is compellingly loveable.
Christopher Howse: A Pilgrim in Spain
Spain
The UK/Brexit
Spanish
Finally . . .
Camino Notes

o Another glorious day of walking trough magnificent countryside yesterday.
o The total distance we covered - from Chantada to Bandeira - was more than 50km but we motored first to Lalín, whence Geoff Jones and I set out to walk to Bandeira, while German Geoff drove there in my car.
o And so the distance we walked was a little more than 22km, which I could manage because the problem of aching-toes which had dogged me previously - pun intended - was solved by this expedient:- 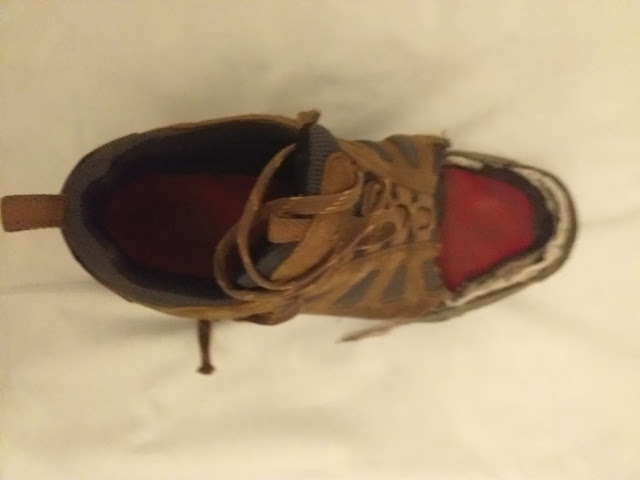 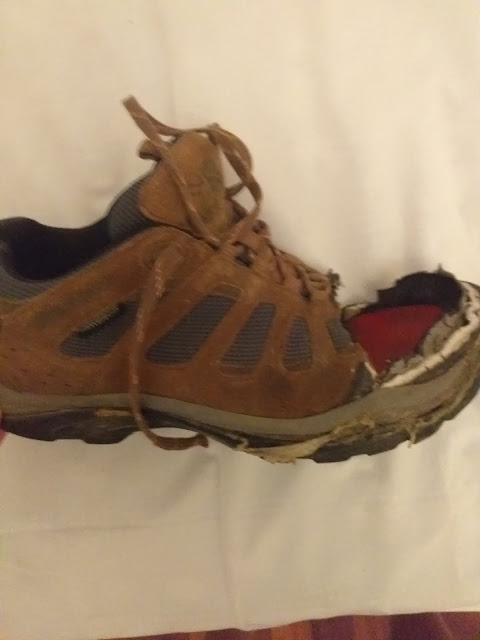 o This drastic measure was suggested by Geoff, as he felt my toes needed more horizontal space. In truth, I think they needed more vertical space but Geoff's solution was equally valid for this problem.
o I should say that Geoff suggested I cut a piece out of my expensive Clarks' shoe but, fortunately, I had in my knapsack a 10-year-old walking shoe on which to practice my surgical skills. Even more fortunately, it was for the correct foot . . .
o As for problems on the track, one day it's wild boars, the next it's tractors dragging a tank full of cow dung:- 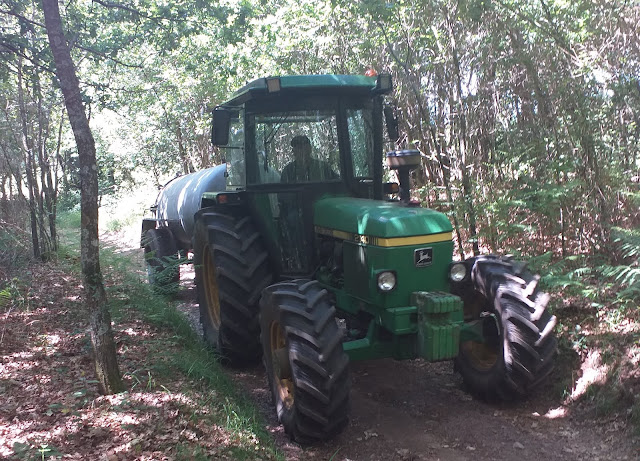 o Which reminds me of a thought that occurred to me a couple of times . . . You should not attempt this camino if you're averse to the rural pong of cow shit.
o I've mentioned that the folk responsible for signs in Castille y León can't agree with their counterparts in Galicia which way the stylised conch shell should point to indicate the way. On leaving a bar just before Laxe, Geoff noticed that the Galician folk couldn't agree even among themselves:- 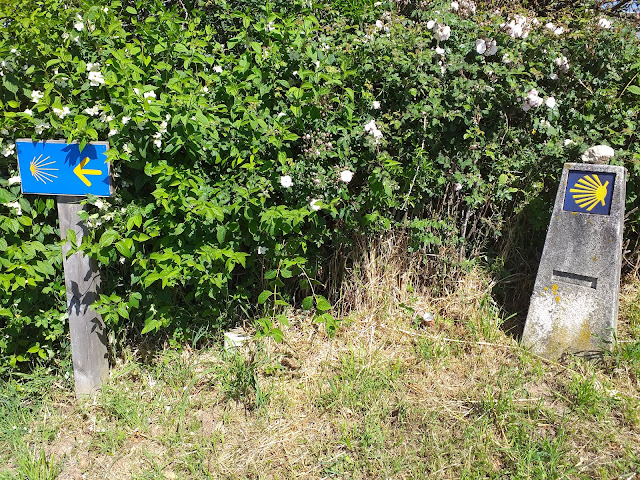 o Talking of signage . . . It's generally good to very good on the Camino Invierno, both before and after it joins the Camino Sanabrés at Laxe. Despite this, Geoff and I both managed to miss two 90 degree turns between Silleda and Bandeira today. The first was right after we'd dropped down from the main road on leaving Silleda and the second was just after we'd passed a cheese factory. In the first case we simply backtracked 100m - having been advised to do so by a kind local resident - and the second time we managed to get ourselves back on track via Geoff's mapping facility on his iPhone. I suspect this made his day . . .
o Prior to these - between Lalín and Laxe - we'd also missed arrows taking us into and through an industrial estate - el polígono industrial- just before the huge roundabout on the edge of Laxe and so ended up walking alongside the N525, parallel to the camino proper for 10 minutes. No harm done.
o Geoff is one of that breed - vegetarians - who find eating a challenge in Spain. Last night he discovered that a Pizza vegetal here contains tuna and mushrooms but precious little else by way of vegetables. Geoff dislikes tuna and regards mushrooms not as a vegetable but as a fungus, so he was not best pleased. But the replacement of the pizza by - inevitably - a tortilla improved his mood somewhat. As did the bottle of wine we shared.
o Incidentally, the name of the wine was one I cited a couple of years back, after I'd bought a bottle in the UK. It's called - in Gallego - The Priest and the Altar Boy and features on the label a sketch of the former with his arm around the neck of the latter. See the foto in Geoff's collection for yesterday here.
o Sadly, today saw the end of my camino, as I brought German Geoff and his Achilles tendon back to my home in nearby Pontevedra, where he'll rest up for a couple of days and enjoy the delights of the city before flying back to Hamburg on Saturday. Geoff Jones, though, will continue walking to Santiago alone, though we managed to persuade him to let me reduce the remaining distance to c. 22km by taking him 10km in my car.
o Final comment . . . A truly memorable camino. In several ways, the best of the 10 I've walked to date. Ignoring the foot problem, of course. I might well do it again one day.

P. S. Geoff hasn't yet posted his blog for today but you can see it here as and when he does. As you'll be able to do when he posts his report on his solo trip today. With a heavy pack on his back this time.
at May 22, 2019