Spanish life is not always likeable but it is compellingly loveable.
Christopher Howse: A Pilgrim in Spain
The Spanish Economy
Spanish Life
The Way of the World 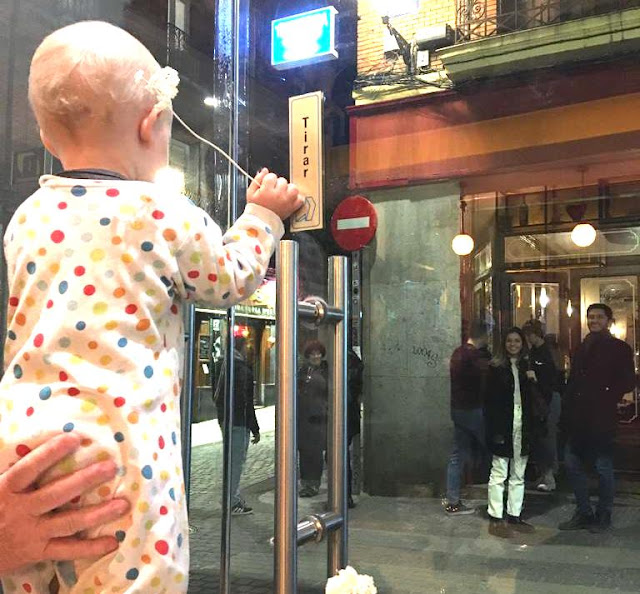 A womaniser at only 14 months of age!

The Spanish Legion, Franco’s regiment, marches on to a brighter future: Isambard Wilkinson, The Times

The Spanish Legion, renowned for uniforms open to the breastbone, fast marching and a death cult creed, is celebrating its centenary

As the Spanish legionnaires storm a mock-up of an African village and capture “an insurgent leader”, their commanding officer observes that the surrounding desert, in Almeria, southern Spain, where Sergio Leone shot his most famous Spaghetti Westerns, provides an ideal training ground for overseas missions. “In the summer we have scorching heat and, as we’re close to the sea, also humidity,” says Captain Albert Estruch, a company commander. “It’s a very suitable place to prepare for Mali.” A battalion will be deploying to the west African nation in a couple of months.

Another battalion, comprising 600 legionnaires, is already in Mali, part of international efforts to quell an expanding Islamist insurgency in Africa’s vast Sahel region. It follows deployments in Iraq, Afghanistan and Lebanon that have confirmed the legion’s place at the vanguard of Spain’s fighting forces.

This year the 7,000-strong Spanish Legion — known as La Legión and renowned for its distinctive uniforms open to the breastbone, fast marching and death cult creed — is celebrating its centenary. Proud of its status as a modern, elite light infantry unit, it enters its second century buoyed by what Lieutenant Colonel Diego Romero, the commanding officer of its headquarters in Almeria, calls “a good supply of public trust”.

But the legion’s survival was not a foregone conclusion. Raised in 1920 as a professional force of mainly foreign recruits to counter conscript losses in Spain’s campaigns in North Africa, its association with the dictator Francisco Franco, one of its founding officers, and its legacy of brutality in the Spanish Civil War landed it within a whisker of disbandment under a Socialist government in the early 1990s.

As it marks its 100th anniversary, it might be asked how one of the world’s most eccentric military outfits still steeped in traditions — its veneration of the Christ of the Good Death, a celebratory drink of “Panther’s Milk” (gin and condensed milk, although no longer cut with gunpowder), annual boxing bouts to resolve personal disputes — overcame its past.

In 1986 the legion ended the recruitment of foreigners and the no-questions-asked policy that enabled people with criminal records to join. But it was the unit’s willingness to fight that won it a reprieve.

The critical moment was the legion’s participation in Nato’s Bosnia mission in 1992. “The government was concerned about the impact of possible casualties on public opinion,” said Lt Col Javier Rios. “We were on the point of extinction — the decree had been drafted — but they realised that the legion could take deaths without causing a public outcry.”

The legion’s ethos had prepared its personnel and their families for the mortal consequences of war, and politically it was seen as expendable. Five died on the mission. “They sent us and we did well. It was the ‘before-and-after’ event in terms of how society saw the legion,” says the colonel, who commands the battalion that will leave Almeria for Mali in May.

Since the Balkan conflict, the legion has undergone a series of modernisations. Its new engineer, cavalry and logistics battalions have made legionnaire troops autonomous and compatible for deployment with other Nato forces. All officers now learn English.

In 1999 women were allowed into all of its ranks and on the frontline. In 2004, three years after the government ended conscription, the legion accepted Spanish-speaking recruits from Spain’s former colonies in Latin America and Africa, in keeping with the rest of the armed forces.

Public opinion now views the military, along with the Civil Guard, as the institution most trusted by Spaniards. The legion’s popularity mirrors that trend, its officers say. The army chief is currently an ex-legionnaire as are a handful of his most senior generals. However, in leftwing circles the unit remains a symbol of Francoism, which senior officers resent, pointing out that they privately told Spain’s right-wing populist Vox party to stop using the legion’s anthem after it was played at one of their rallies last year.

Captain Estruch says politics has nothing to do with the legion’s appeal among recruits. “Officers and other ranks, all of us, apply to join because it’s the best light infantry unit and most likely to get foreign missions.” He summons by radio one of his snipers hidden in scrub on a hillside above the “African village” they are training in. “Everybody has heard of the legion, they once came to my own country,” says the sniper, Corporal Marvin Martínez, 35, from El Salvador, a veteran of operations in Afghanistan, Iraq and Congo. “I joined because it’s for those who want action.”

This is the modern face of the legion. Its past has now been dragooned into the regimental museums, where, in Almeria, photographs of “Comandante Franco” hang alongside a painting of José Millán-Astray, who founded the unit on the lines of the French Foreign Legion, which he went to study in Algeria. Spain at the time was suffering the humiliation of the loss of its last colonies, Cuba and The Philippines, to the United States and seeking to restore its glory in North Africa. Millan-Astray added Spanish mystic and imperial twists to his legion, for example calling its regiments “tercios” after the infantry units feared throughout 16th-century Europe when Spain was the world’s most powerful nation.

The museum has a copy of his translation of a French book on Bushido, the Samurai code of honour on which he based the legion’s creed. A 12-point catechism learnt by heart by all legionnaires, the creed contains precepts ranging from oaths never to abandon a comrade in the field to exhortations for legionnaires to embrace death for “the worst is to live as a coward”.

Dubbed “the glorious mutilated one”, Millan-Astray received numerous wounds, losing an eye and an arm in combat in Morocco, and popularised the legion’s slogan “Viva la muerte!”.

Across the Mediterranean in Melilla, one of Spain’s North African territories[decidedly not a colony], the legion’s garrison, whose purpose is to deter incursions from Morocco — which claims sovereignty over the territory — cleaves more to the old spirit. From a vantage point in the legion’s colonial-era fort, the regiment’s commander, Colonel Fernando Meler, gestures towards the surrounding hills, pointing out the sites of battles during the 1920s Rif War where the unit was first blooded. “Our history, creed and traditions are what make the legion different,” says Colonel Meler. “They also give us the mysticism — the belief in beyond what is understandable — that make us ready to do something that is not normal, to go into battle and die.” Part of that tradition is dedication to the Christ of the Good Death, a full-size Crucifix housed in Malaga that legionnaires famously parade during the city’s Easter Holy Week. “Because Melilla has a large Muslim population, we have many Muslim legionnaires,” says Colonel Meler. “One of them is about to leave the army and has asked me for a parting favour: to take part in the Malaga procession this year. He says that although Allah is his God the Christ of the Good Death is his protector.”

Colonel Meler, donning the white gloves that distinguish legionnaire officers from other ranks, notes that the legion has eliminated some of its old traditions. Its personnel no longer run with sacks full of rocks and the image of a chained Moor has been removed from his regiment’s coat of arms. “However, we have retained combat over personal issues whereby a legionnaire, who perhaps has had his girlfriend stolen by another, can challenge his rival to a boxing match that takes place once a year on the legion’s anniversary,” he says. “It’s not very graceful but effective in healing disputes and done in front of other legionnaires, out in the open.”

Harking back to the time when the unit recruited foreigners, the colonel sings the opening lines of a song about an Englishman from London who goes to join the legion, but deserts as he can’t stomach the tough regime. But, he adds, not all Englishmen failed to cut the mustard. Peter Kemp commanded a platoon and was badly wounded during the civil war. He survived, seeing action as a commando with the Special Operations Executive in the Second World War and writing for The Times.

The next day, the legion’s unique character is on full display when Col Meler’s regiment parades for its veterans, wearing open sage green tunics and with cap tassels bobbing as, led by goats, they march the frenetic paso legionario to bugles and drums. Singing their anthem, Betrothed to Death, a guard of legionnaires carries a replica of the Christ of the Good Death, swaying the crucifix above their heads before placing it at the front of the parade.

With the centenary, which is officially commemorated on the first legionnaire’s enlistment date, September 20, “we can demonstrate our mix of tradition and modernity and that we are the most exigent unit in Spain’s army,” says the colonel. “We must be at our best because our enemies are jealous and want to see us fail,” he adds. “But we wear our tunics open and our chests exposed because we are generous and embrace death.” [Very useful in an army, of course]

1898 Spain loses colonies of Cuba and The Philippines in Spanish-American War. Attempts to bolster national morale with military campaigns in North Africa.

1921-27 Rif War in North Africa. Spanish forces suffer crushing defeat at Annual in 1921, with 8,000 soldiers killed. Foreigners Regiment races to protect Melilla. Sees its first action in mountains around the enclave. In 1925 it takes part in Hispano-French landing at Alhucemas, a bid to win back territory lost after Annual.

1934 Under the command of Franco, the Foreigners Regiment takes part in the massacre of rebellious miners in Asturias. 1,500 miners killed in action seen as prelude to Spanish Civil War.

1936 -39 La Legión is at heart of rebel forces that stage coup d’etat leads to the war. The Nationalist side’s most effective unit, it fought 3,000 actions with legionnaires committing numerous atrocities. After its end, the unit returned to Africa.

1957 -75 La Legión is at the centre of operations in Spanish Sahara, engaging anti-colonial forces in numerous battles. On June 17, 1970, Legión units open fire and kill between two and eleven demonstrators, fuelling the freedom movement that led to Spain withdrawing its forces from the territory, now known as Western Sahara.

1986 End of the no-questions-asked recruitment policy and of recruitment of foreign nationals.

1992 La Legión joins Nato forces in the Balkans conflict, proving its worth in international operations and saving itself from being scrapped.

1999 Spanish army, including La Legión, accepts women into all ranks and for front line service.

2004 Citizens of countries with historical links with Spain — generally from former colonies in South and Central America and Equatorial Guinea — are allowed to join the armed forces.

What a cute little charmer!

Yea, I saw that news