A couple of weeks ago, I posted - from a café above our fish and seafood market - a foto of the back of a pazo(mansion) that used to have a vista over the river and the fields beyond. I mentioned its lovely facade, in the quietest square in Pontevedra:- 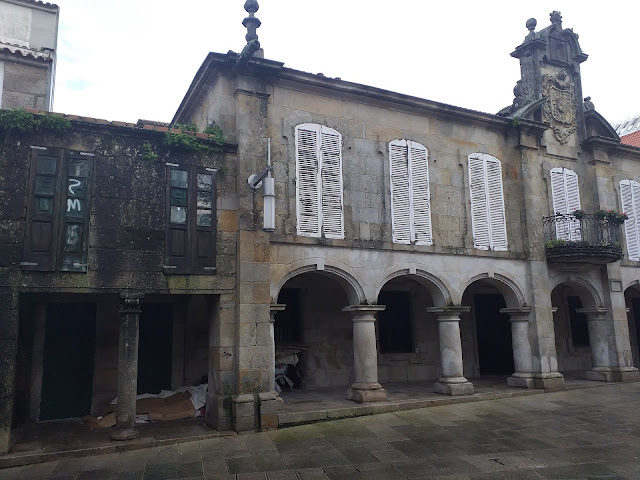 On the left you can see a small house in a poor state of repair, whose portal is used by at least one sintecho(homeless person) as a place in which to sleep. I might already have said my guess is no one knows now who owns it. Or there's a family dispute about selling it, leaving it to fall into greater and greater disrepair. Which happens quite a lot here in Galicia, where title to property can be exceedingly complex.

Hence my longstanding advice, always use a lawyer here and NEVER rely on the notary and - God forfend! - the ever-so-charming-and-helpful estate agent who will accelerate your purchase. This is the best property lawyer in Galicia. And she is fluent in English and operates throughout Spain.

Reading my diary of 2000 and 2001, it's clear I gradually became inured to the vagaries of the Spanish postal system. Back then, I used to get several magazines from the UK and I knew what date they were published in the UK. So it frustrated me when they didn't arrive here for a couple of weeks. But less and less over time, as I obeyed my own advice to others, viz: Lower your expectations. Have things improved? Well, I think so, possibly because there are a lot fewer items sent in the mail these days. But July and August are still disaster months and yesterday I finally received the edition of Prospect issued in mid December, along with the letter I mention below dated 24 December. So, it depends on the time of year, I guess.

In this, the second poorest region in Spain, we have one of the costliest toll roads in the country - the AP9, which runs along the coast between Vigo and La Coruña. As usual, the fee rose this month, in contrast to elsewhere in Spain, where regional governments have reduced or even abolished fees. I'm not sure anyone knows why. But there  are suspicions, of course.

Well, I'm even more confused than ever about my EHIC card. Despite being told in December I couldn't have 2 cards, I received yesterday a second one with a letter dated 24 December. This was before my exchange of emails of last week on whether I needed to apply again before or after the first expired - almost immediately - in late January. Unlike the first, the second has an expiry date in December 2024 and a hologram of the Union Jack in the top right hand corner. So, is it the new GHIC, even though it's labelled EUROPEAN HEALTH INSURANCE CARD or EHIC? I might know the answer if and when there's a follow up to last week's email exchange. Or if I apply now for a GHIC, I guess.

The company Peloton, which sells snazzy, expensive exercise bikes, is now valued on the crazy US stock exchange at more than the Ford motor company.

Had to believe but it's said English is the only language in the world which capitalises the first person singular - I. Other than at the start of a sentence, I guess.

Reader Perry has introduced me to a new world portainjerto, meaning 'rootstock'. As in: El que quiera tener el fruto sin dificultad, debe plantar el árbol sobre portainjerto enano. But I don't suppose I'll be using it much. If ever.

Another couple of words new to me: trasmallo(trammel net) and fisga(trident) in a report about salmon poachers. Also not terribly useful.

Plus Escarmentar: To punish; teach a lesson to. In a report about parents prosecuted for hitting their kids.

No one will notice in the dark: De noche, todos los gatos son pardos.

Nothing goes on for ever: No hay mal ni bien que cien años dure.

Every Xmas, Private Eye publishes a page or two of spoof small ads. Here's one of this year's crop:- 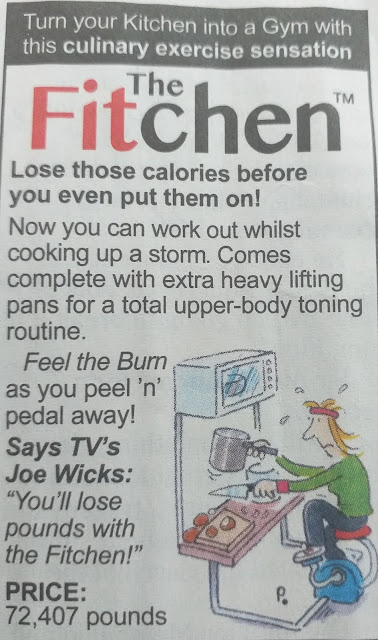 You should know that sometimes one of the satirical inventions actually makes it to the market . . Life imitating Art, as it were.

"At night all cats are grey" is also used in English.

Our mail has gone from bad to worse. Ever since September we've been missing letters, some of them important. Somehow, a packet I ordered from England in December did make it without a hitch. But a calendar I had ordered from the U.S. earlier only arrived last week, and I suspect a neighbor had it delivered to his house, because it was leaning against our front door at eight thirty in the morning. The mailman does not go by so early. It doesn't help that about three years ago, Rianxo changed all the numbers on all the houses to get rid of the letters. There were houses numbered, for example, 12, and 12A, and 12B, etc.

Many thanks. Daniel. Most interesting. Of course, that's an average. Along the coast the pci is very much higher, I suspect. Maybe the Xunta thinks we can all afford autopista toll fees which are higher than the cost off petrol per km . . . . .

@María when I lived in Canada we rented an upstairs apartment and the address was 294-1/2 Frood Road. Some houses had A or B. Are fraction numbers used in the U.S.A.?

@Eamon, I think there probably are, but not in Boston, where I lived. At least, I don't remember any.