Something else I forgot to say about the Oseira monastery . . . Like many other innocent places around the country, it was used as a prison by the fascists during and after the civil war.

1. The year 1898 was important for both the (North) Americans and the Spanish. For it was when the former wrested the Philippines from the latter. Thus, the USA got its first colony and Spain lost its last. This disaster has not yet been forgotten in Spain but - the point of this paragraph - I was surprised to read that Kipling's poem The White Man's Burden was dedicated not to the men and women who ran Britain's empire but to the Americans who were embarking on their own. By the way, this seminal event of 1898 accounts in part for the deep vein of anti-Americanism which runs through the body Spanish. Even if it did have some beneficial effects back home. This, for example.

2. Forgetting the Spanish Civil War: This is proving harder than expected by those who survived it, it seems. Which is hardly surprising, given that no attempts have ever been made at reconciliation. And never will be, if the right-of-centre PP party has its way. Too many skeletons. The victors are still writing history here.


In Pontevedra, parents are being taught how to give their kids space and allow them to develop their independence. When I was a kid, there was no bloody choice. My mother recently astonished me with the news that, aged 9, I used to take my 3 younger siblings to school on a bus. Having, of course, been regularly warned not to take sweets from a stranger. She needn't have worried too much, though, for those were the days when the news agenda wasn't dominated by the scurrilous tabloids and the UK wasn't overrun with pedophiles. Except perhaps in the world of soccer.

Finally . . . When I was an A Level student of history, I came across a saying which my teacher disappointingly dismissed as having whiskers: A diplomat is an honest man sent abroad to lie for his country. Despite its long pedigree, Boris Johnson, the UK Foreign Secretary, appears not to have heard this. Or, more likely, is happy to ignore it. So pigeons are now fluttering all over the dovecot after he accused the Iranians and the Saudis of fighting proxy wars in the Middle East. We all know this is true but can't, we're told, be said because the Saudis have ploughed so much dosh into London property that the national market would collapse if they took umbrage and dumped it all. Might not be a bad thing, given its ludicrous heights. And then there's all those arms sales which the French would love to have. What price honesty? 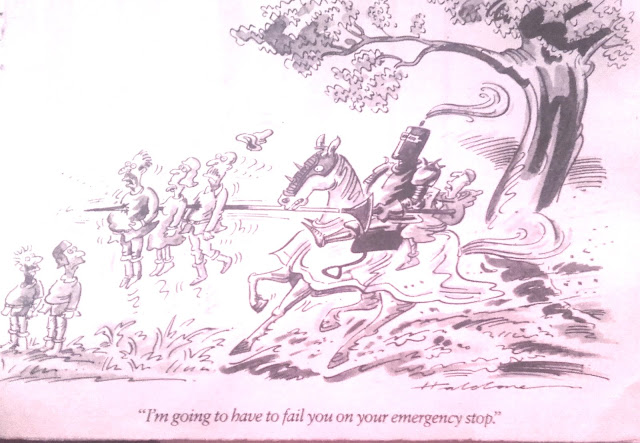 If you liked this cartoon, you'll surely appreciate this FB page:
at December 10, 2016