Spanish life is not always likeable but it is compellingly loveable.
Christopher Howse: A Pilgrim in Spain
The Spanish Economy
Spanish Life
UK Life
The USA
The Way of the World
Spanish 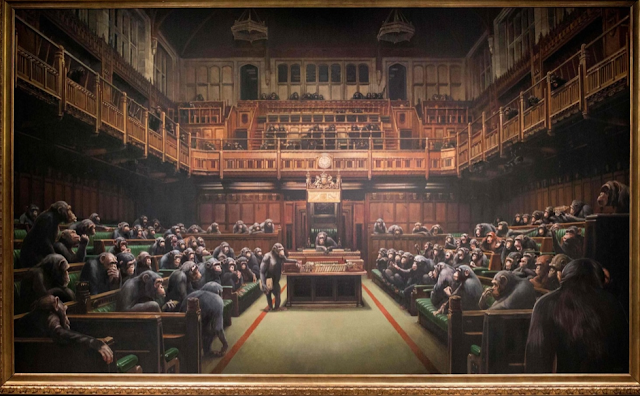 Parliament, you may have heard, isn’t currently held in high repute. It might, therefore, seem apt that the art sale in the headlines this week – during Frieze London, too – wasn’t an abstract expressionist work, or a sculpture in stainless steel, but a 14ft figurative painting of the House of Commons in which the MPs are all chimpanzees.

But Devolved Parliament is the work of Banksy, and the sale, it seems to me, is a joke in a number of ways. Much of the joke, for a start, is on whichever member of the beau monde spent £9.9 million on the painting at Sotheby’s. The work isn’t new – it’s a decade old – though the artist has tweaked it a little of late. The lights in the chamber, for instance, are dimmer; a banana is now upside-down. “It’s just so topical,” the dealer Acoris Andipa sighed to The New York Times.

Some of the joke may be on Banksy himself. The sale beat his record auction price (£1.5 million) and the painting’s guide price (£1.5-2 million), but he didn’t own Devolved Parliament and won’t have earned royalties.

The rest of the joke is on a public who thinks Banksy a renegade, not a hack. The artist is understood to be anti-establishment in a vaguely sixth-form way – his biographer, Will Ellsworth-Jones, told me that he has “a sort of Guardian politics” – but his work is, on the contrary, as supercilious as art can be. He treats you like a fool: here is my work, swallow my message. Witness his mural in Venice this year: a refugee girl holding a flare in bubblegum pink. The saccharine colour and the likeness to the Statue of Liberty are satire for tiny tots. The only thing at Sotheby’s that wasn’t a joke, therefore, was Devolved Parliament itself. (Except the title, I suppose, though if ever a pun bore out Freud’s riff about “the lowest form of wit”, it’s that one.)

The point is to solve the message, and as ever with Banksy, the subtlety is pegged to how much the artist thinks you can understand. In brief: MPs are unedifying fools, like chimps.

Banksy's work overlooking the Rio de Ca Foscari in Venice Credit: AFP
This isn’t anti-establishment at all. The point of satire is to extract the hidden faults of a person or thing, in order to show how their behaviour could be transformed. If the audience looks or listens carefully, they’ll find vestiges of their own behaviour echoed back. This can amount to a political purpose, if it’s done incisively.

But Devolved Parliament has nothing to say about how British politics fell so low, or in what way, or how it might be redeemed, or why any of this matters, or how. An individual chimp cannot evolve. You can only point and snigger. This is £9.9 million of nihilism in paint.

And, whatever the subject at hand, that’s the only move Banksy has. Another example: an Extinction Rebellion-themed mural, created one night in April, depicts a child who holds an XR sign and tends a small green shoot. She represents innocence, because she could represent nothing else. The effect, here as elsewhere, depends on the use of children: creatures who need protection from bad people and suffer projection by the good.

Banksy’s art is coercive, and its politics are trash, because its modus operandi is to make you ignore the complexities of things. Few critics care about his work, beyond a horror that he represents contemporary art in the public eye. But his “subversive” gestures only win him more headlines, only thrill his audience more. When his print Girl with Balloon was sold for £1.04 million at Sotheby’s last year, he shredded it live, to gasps and coos. Just watch: next time it’s auctioned, retitled “Love is in the Bin”, the price will be higher than that.

When it pays to be the licensed jester, why would he quit the role? A clear, distinctive identity suits nothing so much as a brand. With Devolved Parliament, according to Sotheby’s, Banksy “distils society’s most complicated political situations into just one deceptively simple image”.

There’s nothing “deceptive” about it. He didn’t ring the tills on this occasion, but the sale drives up the value of the works, such as prints, that he does directly sell. Banksy, at heart, is a grifter. In that sense, his talent is clear.

2. The Nazi sympathiser whose Vermeer forgeries fooled the world – and the British eccentric who helped him. Andrew Graham-Dixon

The history of fakes and forgery has thrown up many a ripping yarn, but the rippingest of all is surely the tale of Han Van Meegeren, the Moriarty of art fraud.

At the height of his criminal career, at the height of the Second World War, he was so flush with cash that he was able to buy more than 120 houses in Amsterdam. His principal residence, 321 Keizersgracht, an elegant canal-side mansion in the heart of the city, housed a wine cellar stacked with champagne and safes filled with gold, jewellery and banknotes.

Van Meegeren earned more money from painting than Picasso. But his was a dark art and his pictures were signed not with his own name, but that of a celebrated Old Master, Johannes Vermeer.

So successful was Van Megeeren in passing off his fakes that at one point – his peak, if that is the right word for it – roughly one-sixth of Vermeer’s entire presumed output was made up of his forgeries.

Earlier this year, I was approached by the BBC to make a documentary about the elusive Van Meegeren. I accepted the invitation, partly because I loved the film’s working title – “V is for Fake” – but mostly because my producers had secured access to all kinds of fascinating but rarely accessible material: transcripts and letters, property registers, even the police evidence gathered at the time of his eventual prosecution in 1945.

So I was able to read his confession, to handle his paintbrushes and paints – he only used 17th-century pigments – and to inspect his inept early experiments in forgery.

Van Meegeren’s story hinges on one single picture, his masterstroke: a fake Vermeer called The Supper at Emmaus, which was acquired in 1937 by the Boijmans van Beuningen Museum in Rotterdam for the eye-watering sum of 520,000 guilders, many millions of euros in modern money.

Soon afterwards, the museum staged a blockbusting exhibition and placed their new acquisition at its centre. Roughly half the population of Holland went to see it. One critic compared it to a Beethoven symphony descended from heaven.

For about eight years, it was one of the most famous paintings in the world – until it became one of the most infamous. These days The Supper at Emmaus is still in Rotterdam, but in museum storage, held in a sliding rack aptly numbered 13.

Looking at the picture in its present basement setting, it can be hard to understand what all the fuss was about. Van Meegeren’s idea of the risen Christ as painted by Vermeer is a painful anachronism: with his drooping eyes, long face and distinctly modern air of melancholy, he bears a closer family resemblance to the stock figures of 1930s Expressionist painting than the figures of any 17th-century picture. Virtually the only detail evoking the work of its supposed creator is the sacramental bread on the table, painted with the little sparkling dots of light characteristic of Vermeer.

So how on earth did Van Meegeren manage to pass off his pastiche as a priceless masterpiece? Van Meegeren was well aware that art historians had long speculated about the possible existence of missing religious pictures by Vermeer. Something from the “lost period” of his early career need one or two details – such as the sparkle on a piece of bread – to suggest Vermeer’s authorship to an ingenious expert. So The Supper at Emmaus was a skilfully baited hook.

The forger’s next challenge lay in the field of chemistry. Oil paint less than a century old dissolves in alcohol, so in Van Meegeren’s time a simple test was applied to determine the antiquity of a picture: swab it with alcohol, and if any paint adheres the picture is wrong. Alone among the forgers of his day, Van Meegeren found a way round this test. He discovered that a solution called Albertol (a derivative of Bakelite), judiciously mixed with oil paint, would stiffen on drying to Old Master levels of hardness.

Perhaps the single most startling discovery I made while working on the BBC documentary about Van Meegeren was the fact that he had help in this breakthrough from England, and help in high places. Enter one Theodore Ward, a wealthy technocrat whose company was at the cutting edge of new paint technology, especially the combination of paint with plastics. In the Twenties and Thirties, Van Meegeren was a regular visitor to Ward’s eccentrically decorated mansion in Golders Green, London, the rooms of which were done up like the interiors in Vermeer’s paintings.

Van Meegeren’s portrait of Ward – one of the few Van Meegerens with his own signature on it – can now be found in the Ashmolean Museum in Oxford, together with a light-heartedly incriminating letter by Ward’s son indicating that his father knew all about Van Meegeren’s activities as a faker. Ward is remembered as a major benefactor to the Ashmolean, having donated around a hundred (genuine) Dutch still life paintings to the museum. He was also, it now emerges, an accomplice to the biggest forgery scam of the century.

Having painted his Supper at Emmaus using the plasticky compound that Ward helped him develop, Van Meegeren could now do it again and again. Over the next few years, a host of other “lost” Vermeers came to market. Each was worse than the last, yet prices kept going up. Van Meegeren sold one to the Rijksmuseum (for a third of the entire wartime grant for Dutch patrimony) and another to Nazi leader Hermann Göring, for what was then the highest sum ever paid for a picture.

He was only caught because he got lazy, leaving a paper trail leading directly from Göring to himself, which was discovered just after the war. Van Meegeren was arrested not for forgery but for collusion with the enemy, and it was only after a week of stonewalling that he finally came clean.

He had painted Goering’s picture himself, he asserted, adding that he had painted “all of them”, including The Supper at Emmaus. When nobody believed him, he called for brushes and an easel, and painted one last pastiche Vermeer – Christ in the Temple – in a temporary studio in Amsterdam’s police headquarters. It looked just like the others – thus making all of them, suddenly, worthless.

At his trial, Van Meegeren pleaded mental frailty and was given just a single year in jail. Slippery to the last, he contrived to die without serving a day of his sentence. His very last forgery was not a painting, but a fake version of himself. He told the Dutch papers he had been a little man standing up against the big bullies: a hero who had sold fakes to the Nazis to save the nation’s real heritage. Because that story was swallowed by the press, he is still remembered with a certain fondness in Holland today. But like so much else in his life it was a lie.

For the record, he was a long-time Nazi sympathiser who spent at least part of his loot on property expropriated from the Dutch Jewish victims of genocide. An artful dodger with a heart of gold? No, Han Van Meegeren was a career criminal, every bit as phony as his Vermeers.
at October 07, 2019