Spanish life is not always likeable but it is compellingly loveable.
Christopher Howse: A Pilgrim in Spain
Spanish Politics
Spanish Life
Galician Life

Until recently it was being used as a carpark but, bearing in mind its location, it was inevitable that it'd end up as this:- I guess it wasn't surrounded by high-rise flat blocks in its early years. 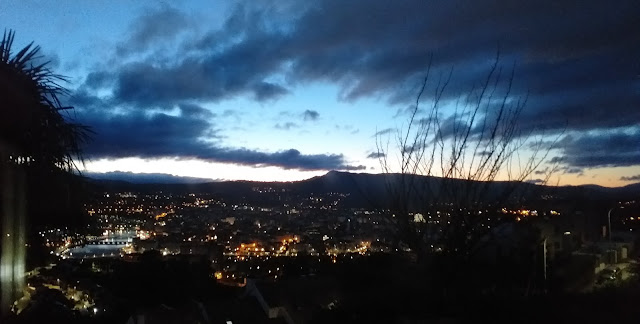 1. The more we see of our political leaders, it seems we like them less: Jeremy Warner, Daily Telegraph

I’ve seen some very odd UK general elections in my time, but none quite as odd as this one, for it is not primarily a contest on the substantive issues of our time, less still is it about meeting the multiple economic challenges coming down the road at us, from artificial intelligence to climate change and an ageing demographic. Nor even is it truly about settling the paralysis of Brexit.

Described by some as the most important election in a generation, it is in fact one about to be determined by something much more banal – which leader is least unpopular.

Jo Swinson, it seems, is very unpopular; people unkindly but increasingly say that they cannot bear her, which is unfortunate for the Lib Dems, whose strategists had ill-advisedly gone for a presidential-style campaign, believing she would be a big beneficiary of the massed ranks of the disfranchised – those who cannot vote for the madnesses of the modern Labour Party but equally cannot forgive the Tories for the rupture of Brexit.

Yet from what I hear, it is not so much fear of “vote Lib Dem, get Corbyn” that is driving the voters away, as that they simply don’t much like Ms Swinson. She’s not got the stardust the Lib Dems were hoping for, and even with an open goal to aim at, has been unable to match the Cleggmania of 2010.

An Ipsos Mori poll conducted last weekend found that 50 per cent of those surveyed had an unfavourable view of her, against just 19 per cent who looked on her favourably, a sharp deterioration on the week before.

Despite his charms, Boris Johnson isn’t that popular either. The same Ipsos Mori poll found that only 33 per cent are currently favourable towards Mr Johnson and 47 per cent unfavourable, again a deterioration on the week before. The more we see of our political leaders, it would seem, the less we like them. Well, there’s a surprise.

Yet fortunately for Mr Johnson, the most unpopular of the lot is Jeremy Corbyn. At 59 per cent, he has a commanding lead in the unpopularity stakes, against just 24 per cent who like the look of him. Even this finding might somewhat overstate his real standing. Where might these favourable voters be, pray tell? I’ve yet to meet one.

It’s not so much his policies the electorate doesn’t like; it’s just him. His biggest flaw? Not nationalisation of everything in sight, not his delusional plans for tax and spend, nor even his ambiguity on Brexit, but that he is judged not to put UK interests first, and is therefore not be trusted with the commanding heights.

What people dislike about him most is that he’s plainly got a problem with patriotism. Whatever their other faults, no previous Labour leader that I can think of could be similarly accused. As one campaigner admitted to me on the doorstep the other day, “our biggest headwind is unfortunately Corbyn himself.

“Everywhere we hear it. It’s hard to get your message across when people think there is a fundamental issue with the leader”.

No such problem troubles Mr Johnson, not because of his relative popularity, but because other than “get Brexit done”, there are no policies to sell. The strategy behind the Conservative Party manifesto seems to have been to say as little as possible.

The Tories have in effect become the status quo party, which I suppose is not so surprising given that they have already been in Government for nearly 10 years now.

Why have they been so immensely modest in their proposals?, asked Paul Johnson, director of the Institute for Fiscal Studies, last week. “Because to do otherwise would either mean resiling from their pledge to balance the current budget or would mean being up front about the need for tax rises to avoid breaking that pledge”. Quite so.

The Conservative Party manifesto, “Get Brexit Done, Unleash Britain’s Potential”, is as empty of substantive solutions to either of these things as the Gobi desert. It was 59 pages of pure nothingness. This I suppose makes for a pleasing contrast with Labour’s doom loop of incredulity, and possibly has the merit of keeping us all guessing. What could they mean by “unleashing Britain’s potential”? Nothing in this document justifies such hypobole.

Now admittedly there is something to be said for do nothing governments. The most terrifying words in the English language, Ronald Reagan was fond of saying, are “I’m from the government, and I’m here to help”. You can have too much policy, too much problem solving, too much interference, too much vision.

Even so, you’d have thought that a party committed to getting Brexit done would have more to say about what awaits the other side. So why are the Tories are holding back? It is because hard choices await, and none of them are likely to be popular with the voters. Never mind what to do with Brexit itself.

Let’s take Boris Johnson’s “guarantee” of net zero in carbon emissions by 2050, “with investment in clean energy solutions and green infrastructure”. This is an easy guarantee to make if only because it is almost completely meaningless. The target date is so far in the future that he’ll be long gone by the time we reach it.

But in any case, if it is to be reached, it will require an early start, including thumping great carbon taxes to drive the necessary energy transition, and equally thumping great carbon tariffs to prevent the emissions simply being offshored to China, India and elsewhere. These will need to begin in the next parliament, causing fuel bills to soar.

There may be ways of mitigating the impact, but it is going to be a tough sell nonetheless for a party which has put a “triple lock” on headline tax rates. Hard as you might look, you won’t find a mention of carbon taxes in the Conservative manifesto.

Incidentally, there is no mention of them in the Labour Party manifesto either, despite the fantasy promises of a “green new deal”. One thing is certain; without big incentives to switch from hydrocarbons, nothing will happen.

For those of us who worry about the economic reform this country so desperately needs, this is a deeply dispiriting election which seems almost wholly to have turned its back on the real world.

While Rome burns, the main parties busy themselves with point scoring irrelevances, such as the manufactured row over non-appearance in media leadership debates and interviews.

Small wonder that Channel 4 News used a melting block of ice in place of Boris Johnson for its leaders’ debate on climate change. It was otherwise a non-event that left viewers scrambling for the remote. A million trees here, a billion there, who any longer is counting?

In this land of the blind, we cry out for hard-headed pragmatists, those who have nothing to offer but blood, toil, tears and sweat but are possessed of the authority to carry the nation with them. Answer comes there none.

2. I can’t be the only one who's fed up with WhatsApp: Bryony Gordon

What did we do before WhatsApp? It’s a question I hear asked quite a lot, usually in settings that have been organised over 500 messages in a WhatsApp group, such as class coffee mornings or birthday parties or any situation,  really, that involves more than two people. My answer is heartfelt, but inevitably not the right one. What did we do before WhatsApp? Well now, let me think.

It’s this last thing that really bothers me. I mean, I’m willing to deal with all the other irritations of the platform just as long as it stays primarily a place for text messages. Text messages, even the text messages with ticks attached to them, are manageable. They just sit there, in a safe space, all the information you need from them available to read whenever you manage to get round to it – on the Tube, in a meeting, during a particularly boring theatre production.

Whereas a voice note requires a quiet space, or a set of headphones, and a pen and paper to note down all the information that lies within it. It’s another invasion into my space, an extra thing to have to process. I mean, listen (just as I am forced to every time you decide to ‘drop’ me  a voice note): WHY DIDN’T YOU JUST CALL? WHAT IS WRONG WITH A PHONE CALL? Why are you walking around speaking all your thoughts into your handset, like a Kardashian? Just call me, or text me, but for the love of Mark Zuckerberg, please do not send me some bastard hybrid of the two!

Oh, I get it. Voice notes are really useful when you’re supposed to be keeping your eye on the road. But  in that case… just keep your eye on the road, and send me a text when you’ve parked up. Texts are for  succinct pieces of information. Calls are for something more intimate. And WhatsApp is never a good place for intimate things.

It’s a mess of people – often people you don’t even know – wittering on to each other about travel plans and dinner reservations and oh my goodness, look at this cat gif. The voice note has  no place there. In fact, I have no place there. I just want human  contact, a conversation with someone sitting in front of me – not another excuse to digitise humanity, and keep it at arm’s length.
at December 02, 2019