Spanish life is not always likeable but it is compellingly loveable.
Christopher Howse: A Pilgrim in Spain
Spanish Politics
Spanish Life
I suspect one or two of these might be familiar to long-term readers.
Galician Life 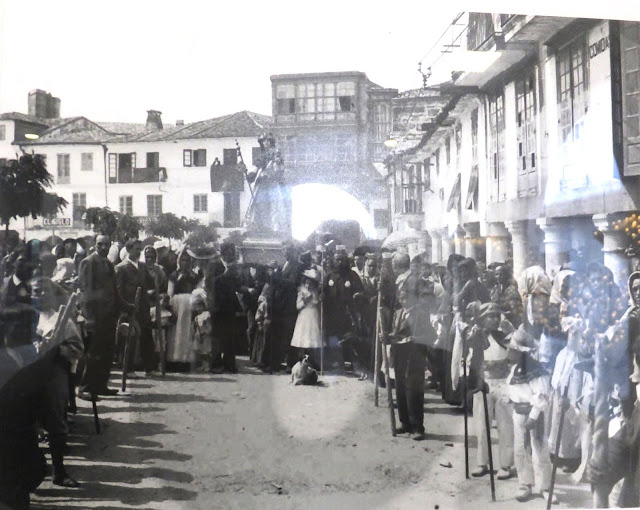 And here's a foto taken recently from much the same spot. Note that, as usual, 2 storey buildings have had a floor added. And the pillars (soportales) have changed shape. Because the original buildings have been entirely replaced:- 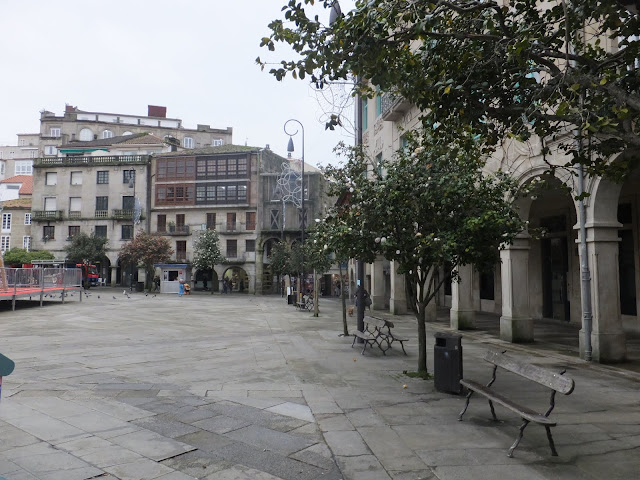 ALL FURRED UP February 2001

In this part of Spain, it rained virtually non-stop from the start of November until early February. I went through at least two umbrellas during this period, an experience I've never had during many years in  England’s ‘wet’ climate. The locals say it’s been worse than anything in living memory but I’m not sure I believe them. They all have umbrellas strapped to their sides like US sheriffs have guns. But, anyway, 10 days ago the sun came out and it has stayed out ever since.

Being  English, I regard a temperature of 18 degrees C (say, 67 degrees F) as a signal to move out of winter gear and into something lighter. If not necessarily shorts and a T-shirt, then at least a shirt with its sleeves rolled up. I know from visiting here last May that this isn’t how they see things here, especially on a Sunday. Pullovers, jackets and even overcoats apparently remain compulsory – by law or convention – until some time in June, when the temperatures reach a level which would close Wimbledon.

Should you shed one or more of these layers before this date, you expose yourself not just to the rays of the sun but also to the shaft of a sarcastic comment along the lines that you are dressed ‘awfully summery’ for the time of year. This helps to explain why, when I sat baking in the town square last weekend, the kid next to me was wearing a duffel coat buttoned up to the neck. But at least he’d taken his scarf off. In fact, I think he offered it to me, there being no fear of paedophiles in Spain. This is not because they don’t have paedophiles here; it’s because they don’t have a gutter press to whip up hysteria about them.

Anyway, what has particularly struck me in the last 10 days is the number of women of a certain age (at the very least) who have been parading through town in fur coats in the blazing sunshine. And two nights ago my neighbour’s wife walked all of 30m to my house for dinner in a fabulous mink coat for which she’d be stoned to death in London, I suspect. As it happens, she does seem to feel the cold but, as far as I was aware, there was no cold to feel that evening.

I found all this very hard to credit and it began to exercise my mind somewhat. But, after 10 days, the explanation finally dawned on me this afternoon. Just as the rain was abnormal, so is this long stretch of sunshine. It is not normally so warm this time of year but it is usually drier. So, it's a time when the wearing of hideously expensive fur coats can be both justified because of the ‘low’ temperatures and risked without too much fear of a damaging downpour. In brief, February is the Fur Coat Season. And what constitutes a little bit of sun – or even a bloody heat wave – isn’t going to be allowed to get in the way of the annual strutting competition. Hell would have to boil over first.

I can be very slow sometimes.
Posted by Colin Davies at 8:14 am

A little catching up to do from previous posts. Edged weapons are still available in the UK, as are bows & crossbows. http://www.kultofathena.com/

Of course, one has to learn to use them; these long swords are especially deadly! https://www.youtube.com/watch?time_continue=271&v=Cob3JMmtctY&feature=emb_logo

War swords have a very keen edge. From 1.25. https://www.youtube.com/watch?v=H79sbI2xBO4
http://kultofathena.com/product.asp?item=ANH24

Bridge allision (the act of a moving vehicle striking a stationary object) on the old road to Santiago. The low bridge at Broadway has been strengthened with decapitation beams, so as to preserve the integrity of the bridge & the steam trains can continue to run.