Spanish life is not always likeable but it is compellingly loveable.
Christopher Howse: A Pilgrim in Spain
Spanish Politics
Spanish Life
Galician Life 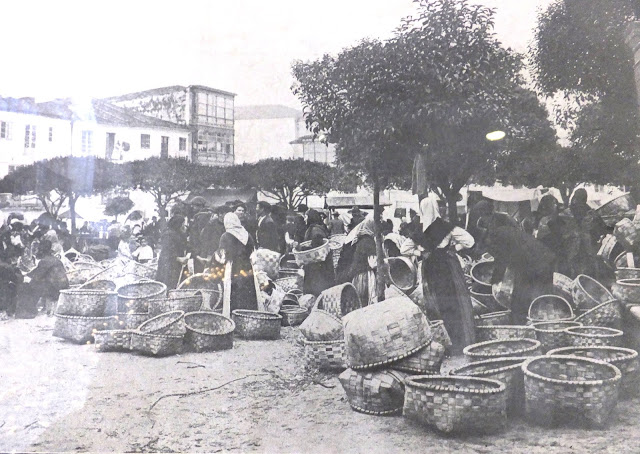 And from the same spot today:- 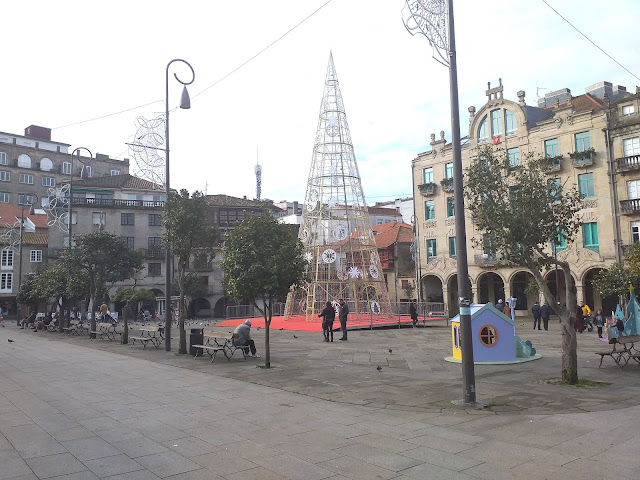 The tall building in the old picture is now alongside buildings of the same height, so no longer stands out. And is, anyway, dwarfed by the new buildings on the right. I can't imagine that the trees are the same ones. . . .  BTW: I've not seen a Basket Day in 19 years. Lots of other things get sold in this square from time to time, but not baskets. Chestnuts probably go back to at least the time of the old foto.
The USA
Spanish
Finally . . .
THE ARTICLE

The Xacobeo prelude: twenty challenges for 2020

There is less than a year left for one of the greatest events in this Galicia of the 20s. In less than 365 days a holy year will begin, the first in eleven years, which is called to lay the foundations of Galicia in the decade. Here are twenty challenges for Xacobeo in 2020.

1. THE AVE: (MORE) NEW DEADLINES
The president of ADIF, Isabel Pardo de Vera, set in an article in this newspaper a new deadline for the implementation of the last section of the Galician high speed train service. According to forecasts, the last kilometers of the route will be completed by the second half of the year. What cannot be known is the exact date on which the line may be in service, a historical and eternally postponed promise that the Xunta wants to be a reality, finally, for this Holy Year.

2. THE CATHEDRAL: WORKS WILL BE CONCLUDED IN NOVEMBER
The Portico, the Obradoiro façade, the roofs, the vaults ... The goal of the Camino has been going through an intense restoration process in recent years, which, according to the deadlines that have been set, will be fully concluded next November . After twelve years of work, the portico de la Gloria recovered its original colors, to the amazement of the world. Payment visits began just one year ago, when the work of Maestro Mateo had to be separated from the rest of the cathedral to avoid being affected by the next phase of the work, which has meant an investment of €17m. The last part of these includes interventions inside the temple, such as the central nave and the cruise ship, as well as on the Compostela roofs.

3. THE WAY: MORE THAN €25M TO SIGNALISE AND CONSERVE
The endpoint is important, but the Way also matters a lot. The Xunta foresees a total investment of more than €12m in works to improve the signaling of 1,600km of pilgrimage routes. The Way maintenance plan foresees a total investment of €15.6m euros for improvement actions on the routes throughout the community. The planned investment in 2020 amounts to €5.2m and the contracts provide for the optimal maintenance of 1,250km of routes in 121 municipalities in Galicia. The largest investment corresponds to the French Way, through which 57% of pilgrims travel to Compostela, with €1.7m.

4. THE HOSTELS: EIGHT NEW CENTERS AND IMPROVEMENTS ON THE NET
The network of hostels is another of the pillars of the pilgrimage experience. The network will be expanded with 8 new establishments and accessibility and energy efficiency improvements will be made to the network, with a total investment exceeding €7m. In addition, defibrillators will be installed in the 70 public shelters, so that the Camino will also be a cardioprotected space. The placement of the devices is also accompanied by the training of the staff working in the shelters.

5. THE COUNTRYSIDE: MORE THAN 100 LANDSCAPE IMPROVEMENTS
The Galicia of the next decade is going to have, maintain and also improve these. The Xunta has reserved €1.2 m to finance more than 100 landscape improvements along the Jacobean itineraries. In addition, the Juana de Vega Foundation will collaborate in combating feism [ugliness] along the Camino. To the realization of a manual of good practices will added the identification of the elements that diminsh the image of the Jacobean route and the management of the most appropriate solution. The total investment is €200,000, of which 105,000 are planned for this year 2020.

6. SECURITY: MORE THAN THOUSAND EFFECTS ON THE ROAD IN GALICIA
The Jacobean Security Plan that the central government sets up every year deploys a thousand Civil Guard agents and also increases the number of people in holiday periods with the cavalry squad and air units. The Way has been proving safe year after year. According to the latest data, corresponding to 2018, the Civil Guard attended only a hundred incidents, and most (74) had to do with the request for information by the pilgrims. Only 23 were health care.

7. CLEANING: THE PILGRIMS REQUEST RESOURCES AND PUBLIC BATHROOMS
Another of the great challenges is the cleanliness of the different pilgrimage routes, an end that already includes the road maintenance contracts. Anyway, pilgrims ask for more fountains and more public toilets.

8. TOURIST FLATS: MORE INSPECTIONS AND NEW CONTROL MEASURES
It is one of the main points of debate about the tourism model, and the Xunta has always defended the need to maintain the balance between the different accommodation models for visitors. Surveillance of illegal tourist dwellings will be intensified this year, in which the obligation for owners to enter ID numbers in the Xunta's register into the advertisements on the online platforms comes into force and, in addition, they must send quarterly occupation data. The inspection activity will also increase during this year. According to the latest data, there are almost 10,000 tourist homes registered in Galicia.

9. SANTIAGO DE COMPOSTELA: ACCESS AND ACCOMMODATION REGULATION
It is the welcoming city par excellence and that requires planning. The big challenges are the reinforcement of security, cleanliness and traffic regulation to avoid collapses. The Concello plan involves the implementation of 4 deterrent parking lots at the entrances of the city and a traffic regulation system that can allow at any given time to even limit vehicle access to the city center. In addition, Santiago has already approved a moratorium in terms of tourist flats that affects practically the entire city while working on specific regulations for them.

10. TOURIST RATE[TAX]: SANTIAGO DOES NOT REJECT THIS IDEA, BUT WITH ANOTHER MODEL
Another of the great points of debate. Is it time to implement a tourist tax? The City Council of Santiago is not closed to it, but believes that the model that an overnight stay tax is not valid for the city, but rather it is necessary to look for a formula that also includes hiking and people who choose formulas other than hoteliers to sleep in the city. There has been talk of charging for hiking in bus stations and parking lots.

11. VISIT OF THE POPE: THE ARCHBISHOP HAS INITIATED THE INVITATION
Every time there is a great Jacobean date, the question soars. Will the pope come to SdC? At this point the mystery remains, but the archbishop, Julián Barrio, has already advanced that the duties are done and that an invitation has been issued for Pope Francis to travel to Galicia next holy year.

12. DIVERSIFICATION: CAN YOU DIE OF SUCCESS?
If there is a threat, it is overcrowding, which degrades the Jacobean experience. The diversification and promotion of different pilgrimage routes has been one of the objectives of recent years to avoid tension - which, however, occurs at certain times - in the pilgrimage routes and in Compostela itself. If a decade ago more than 70% of the walkers traveled the best known route, the French one, now they are just over 50%.

13. DECENTRALIZE: OPPORTUNITIES FOR THE 313 CITY HALLS
Diversifying pilgrimage routes is also a way for most of the region to benefit from the Holy Year. In this tone of decentralization, the Xunta foresees that during the Holy Year an average of 10 daily activities organized by 313 locations will be organized. That is, throughout Galician region.

14. PARTICIPATION: THE XACOBEO OF ALL GALLEGOS
Among the strategic lines of this holy year is the promotion of the participation of the Galician population. One of the great initiatives is O teu Xacobeo, which wants to give opportunities to individual proposals so that this Xacobeo belongs to everyone.

15. SUSTAINABILITY: 350 ACTIVITIES TO REACH THE ZERO IMPACT
Sustainability is another of the pillars of this Holy Year. The program has added more than 350 activities that seek the involvement of residents and pilgrims to try to approach a zero impact Xacobeo.

16. SPONSORSHIPS: 40 COMPANIES INVOLVED
The Xunta, after closing agreements worth 6.7 million euros, explained a few months ago that it was in talks with more than 40 companies to get sponsorships for the holy year, a measure that also benefits from a series of tax bonuses that They entered into force at the end of 2018 and will remain active until September 2021.

17. AN INTERNATIONAL YEAR: NEW YORK, ROME, SANTIAGO
Another of the great challenges of this year is to advance the internationalization of the Jacobean culture and the ways to Santiago, and to reinforce the European spirit that Xacobeo has always had. Immediate measures include the opening of an office of the Camino in Rome and the holding of a symposium in New York, as well as a meeting of European regions on the Camino in spring, an international congress of Jacobean associations and the holding of a global congress of Jacobean culture, among other initiatives planned for 2020.

18. AND CULTURAL: PROGRAMMING OF GREAT EVENTS
The success of the first great exhibition of the Holy Year, Galicia: un Relato en el Mundo gives the dimension of the cultural potential of the Holy year, in which great cultural events are expected. The first is the reissue of one of the great successes of recent years, the O Son do Camiño festival, which will coincide with the completion of the works at the accesses of the Camino in Monte do Gozo. In addition, the 2nd major exhibition of the Xacobeo 2021,  the legacy of which can currently be visited at the City of Culture, is scheduled to be launched in October. In August, a meeting of young artists is scheduled on the Camino and el Xacobeo Importa, a world music program along the way. In addition, 3Caminos will be the first television and transmedia series on the Camino. Its shooting will pass through three continents and five different countries. An audience of 5 million is expected.

19. ROYAL PAATRONAGE: 17 YEARS OF WAITING
A key thing which the city has been waiting for for a long time: Royal Patronage. It has been 17 years since the last one, and although the schedule speaks of the end of 2019 and the beginning of 2020, political upheaval has been delaying the deadlines. First you have to have a government. And then, fit it into the agenda of the Royal House.

20. AND A JUBILEE YEAR: THE SPIRITUAL DIMENSION OF THE DATE
What cannot be forgotten is the spiritual dimension of the Holy Year: "It is necessary to underline the Catholic dimension of the holy year, to try to maintain the identity of what it means," said the archbishop, Julián Barrio, in the presentation of his Program for the jubilee year, which includes a greater presence of technology in materials, cultural programming and even a pilgrimage to the Holy Land, as well as the reinforcement of the volunteers who are in charge of attending the Pilgrim Reception Office every day, one of the nerve points of Jacobean activities.
at January 07, 2020