Spanish life is not always likeable but it is compellingly loveable.
- Christopher Howse: A Pilgrim in Spain [A terrible book, by the way. Don't be           tempted to buy it, unless you're a very religious Protestant.]
The Coronavirus

What to leave out??
- A guy in Vigo has asked to be arrested because he can no longer stand living with his mother.

- A young Mallorcan has threatened to kill his upstairs neighbours because of their intolerable noise.
Life in the Time of Something Like Cholera
The USA
Shysters Corner
Spanish
- Ataúd: Coffin
- Feretro: Ditto
- Ferretro: Hardware
- Ferretería: Hardware store. Not a funeral home.
Finally . . . 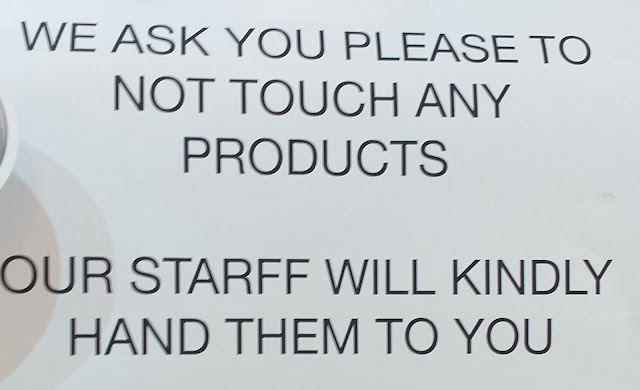 But I still heartily recommend the impressive podcast. Incidentally, I learned there of the Antonine plague ('plaque') of 165-180AD which killed c. 33% of the population in some regions of Italy. And which led me to articles on the Black Death and the London plague of 1665, where the numbers were even higher.

And, on that happy note, I'll knock off for today.

No, hang on. For those with a funny bone and a strong stomach, here's an hilarious video from the Australian satirical outfit The Juice Media. [Munted: Australian slang:  Intoxicated (by drugs or alcohol)]
Posted by Colin Davies at 8:58 am

I agree whole heartedly that those who live in towns and cities should stay at home. But those of us who live in villages, heck, the OUTSKIRTS of villages, like me, should be allowed to wander into the woods. But we can't. Normally, the woods are abandoned. The only people you'll find in them are hunters (in season) and lumbermen. (Contrary to older women's ideas, rapists are not hiding behind rocks waiting to pounce on a woman.) But we are told we can't go, even if we come into no contact with anyone, at all, ever.

I think the first act of freedom I will do, whether or not I am accompanied, is to get in the car, fill the gas tank, and just drive.

By the way, "ferretro" doesn't exist. The word is "ferretero" and means the owner or worker at a hardware store.

Reverso, for what it's worth, told me it was 'hardware', so I assumed the other words came from that - ferretero and ferretería.

But you're right that it's not in the RAEW dictionary.